James Franklin Hyneman (born September 25, 1956) is an American special effects expert who is best known as the co-host of the television series MythBusters alongside Adam Savage. He is also the owner of M5 Industries, the special effects workshop where MythBusters was filmed. He is known among Robot Wars devotees for his robot entry, Blendo, which, for a time, was deemed too dangerous for entry in the competition. He is one of the designers of the aerial robotic camera system Wavecam, used in sports and entertainment events. 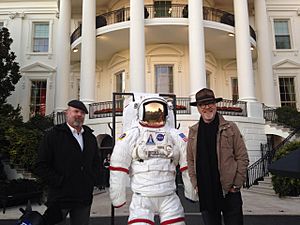 A distinctive part of his appearance is his dark beret, red Chuck Taylors, and white lab shirt — which almost never seem to get dirty, no matter how messy the myths tested are. This, his walrus-style moustache, and deep voice are occasional subjects for light-hearted jokes by co-host Adam Savage and other team members.

A sign hanging in his workshop reads "Clean Up Or Die", which is visible in several episodes, expresses his desire to keep things clean and in order around the shop. He is known for his calm, logical, no-nonsense style and his ideas tend to be more simplified, he has been heard saying "keep it as simple as possible."

Much of the experience Hyneman used on MythBusters came from his time in the visual and special effects professions. Hyneman first broke into the effects industry in the mid 80s as an uncredited special effects crew member on Top Gun. From there, Hyneman spent time as an animatronics technician for films such as Flubber, as well as work on the second and third installments of the Matrix Trilogy.

Hyneman was born in Marshall, Michigan. He was raised in Columbus, Indiana. He studied at Indiana University. Hyneman has been married to Eileen Walsh, a science teacher, since 1989.

All content from Kiddle encyclopedia articles (including the article images and facts) can be freely used under Attribution-ShareAlike license, unless stated otherwise. Cite this article:
Jamie Hyneman Facts for Kids. Kiddle Encyclopedia.