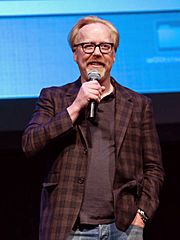 Adam Whitney Savage (born July 15, 1967) is an American special effects, scientist, artist, television personality, and educator. He has been the co-host of MythBusters since 2003.

Savage was born on July 15, 1967 in New York City, New York. He studied at Tisch School of the Arts. He has been married to Julia Savage since 2002. He has two children. Savage is an atheist.

All content from Kiddle encyclopedia articles (including the article images and facts) can be freely used under Attribution-ShareAlike license, unless stated otherwise. Cite this article:
Adam Savage Facts for Kids. Kiddle Encyclopedia.