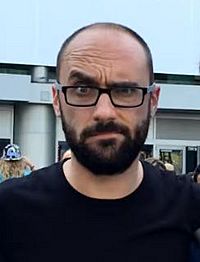 Michael David Stevens (born January 23, 1986) is an American educator, public speaker, comedian, entertainer, editor, and internet celebrity. He is best known for creating and hosting the popular education YouTube channel Vsauce. His videos are about the explanations of science, philosophy, culture, and illusion.

As the host of Vsauce, Stevens has become one of the most successful YouTubers. He was born in Kansas City, Missouri.

In 2017, he created and starred in the YouTube Premium series Mind Field, and presented the nationwide educational stage tour Brain Candy Live! alongside Adam Savage.

All content from Kiddle encyclopedia articles (including the article images and facts) can be freely used under Attribution-ShareAlike license, unless stated otherwise. Cite this article:
Michael Stevens Facts for Kids. Kiddle Encyclopedia.