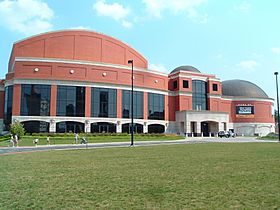 The Clay Center for the Arts and Sciences of West Virginia in Charleston, West Virginia, US is a 240,000-square-foot (22,000 m2) facility dedicated to promoting performing arts, visual arts, and the sciences. All three being housed under one roof makes the Clay Center one of the few of its kind in the United States.

The Clay Center opened on July 12, 2003, and is one of the most ambitious economic, cultural and educational undertakings in West Virginia history. It is currently the home to Avampato Discovery Museum and the West Virginia Symphony.

The Avampato Discovery Museum features two floors of interactive science exhibits and an art gallery. Science gallery themes include creativity and engineering; sound, light and color; energy and magnetism; earth science; health and wellness; and a special area for children age five and under. The Museum's art gallery features selections from its permanent collections and traveling exhibitions.

The ElectricSky Theater is part of the Museum and presents planetarium shows and large format films on its giant domed screen. Admission to the Theater is in addition to the regular Museum ticket.

The Clay Center is named for West Virginia philanthropists Buckner and Lyell Clay of the Clay Foundation. Construction began in 1999.

All content from Kiddle encyclopedia articles (including the article images and facts) can be freely used under Attribution-ShareAlike license, unless stated otherwise. Cite this article:
Clay Center (West Virginia) Facts for Kids. Kiddle Encyclopedia.