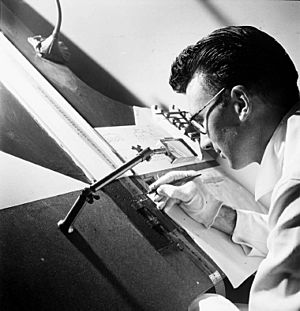 An animator is an artist who makes drawings for movies. The animator makes many drawings which are called "frames". These are played very quickly, one after another, to create animation. It makes it look as if the pictures are moving.

Animators can work in many areas including movies, television, video games, and the internet. There are many ways of making animations. Animators usually work with other people to form a team. These may be other animators, but can also include layout artists (who design the backgrounds, lighting, and camera angles), storyboard artists (who draw panels of the action from the script), background artists (who paint the "scenery"), voice actors who speak the words, and musicians who make the music.

All content from Kiddle encyclopedia articles (including the article images and facts) can be freely used under Attribution-ShareAlike license, unless stated otherwise. Cite this article:
Animator Facts for Kids. Kiddle Encyclopedia.