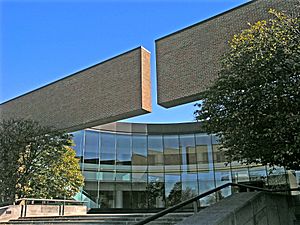 Columbus is a city in and the county seat of Bartholomew County, Indiana, United States. The population was 44,061 at the 2010 census. In its built environment, the relatively small city has provided a unique place for noted Modern architecture. Located about 40 miles (64 km) south of Indianapolis, on the east fork of the White River, it is the state's 20th largest city. It is also the principal city of the Columbus, Indiana metropolitan statistical area, which encompasses all of Bartholomew County. Columbus is the birthplace of former Indiana Governor and current Vice President of the United States, Mike Pence.

National Geographic Traveler ranked Columbus 11th on its historic destinations list in late 2008, describing the city as "authentic, unique, and unspoiled." Columbus won the national contest "America in Bloom" in 2006, and in 2004 it was named one of "The Ten Most Playful Towns" by Nick Jr. Family Magazine. The July 2005 edition of GQ magazine named Columbus one of the "62 Reasons to Love Your Country". Columbus is the headquarters of the engine company Cummins, Inc.

The land which is now Columbus was bought by General John Tipton and Luke Bonesteel in 1820. Tipton built a log cabin on Mount Tipton, a small hill overlooking White River and the surrounding flat, heavily forested and swampy valley. The town was known as Tiptonia, named in honor of Tipton. The town's name was changed to Columbus on March 20, 1821. General Tipton was upset by the name change and decided to leave the newly founded town. He later became the highway commissioner for the State of Indiana and was assigned to building a highway from Indianapolis, Indiana to Louisville, Kentucky. When the road reached Columbus, Tipton constructed the first bypass road ever built; it detoured south around the west side of Columbus en route to Seymour.

Joseph McKinney was the first to plot the town of Columbus, but no date was recorded.

It was recorded for years in the local history books that the land on which Columbus sits was donated by General Tipton; however, a deed purporting to show a sale of the land was acquired in 2003 by Historic Columbus Indiana. The deed indicated that General Tipton actually sold the land.

A ferry was established to avoid crossing both the Flatrock and Driftwood rivers, which join only a short distance above the site of the ferry. This became a village of three or four log cabins, and a store was added in 1821. Later that year, Bartholomew County was organized by an act of the State Legislature and named to honor the famous Hoosier militiaman, General Joseph Bartholomew. Columbus was incorporated on June 28, 1864.

The first railroad in Indiana reached Columbus from Madison, Indiana in 1844. This eventually became the Madison branch of the Pennsylvania Railroad. The railroad fostered the growth of the community into one of the largest communities in Indiana, and three more railroads reached the city by 1850.

Columbus is host to the oldest theater in Indiana, The Crump Theatre, which was built in 1889 by John Crump. Today the building is in the Columbus Historic District and an all-ages venue with occasional musical performances. Columbus was host to the oldest continually operated bookstore in Indiana, Cummins Bookstore, which began operations in 1892 and closed in late 2007.

The Irwin Union Bank building was built in 1954. It was designated a National Historic Landmark by the National Park Service in 2001 in recognition of its unique architecture. The building consists of a one-story bank structure adjacent to a three-story office annex. A portion of the office annex was built along with the banking hall in 1954. The remaining larger portion, designed by Kevin Roche John Dinkeloo and Associates, was built in 1973. Eero Saarinen designed the bank building with its glazed hall to be set off against the blank background of its three-story brick annex. Two steel and glass vestibule connectors lead from the north side of this structure to the annex. The building was designed to distance the Irwin Union Bank from traditional banking architecture, which mostly echoed imposing, neoclassical style buildings of brick or stone. Tellers were behind iron bars and removed from their customers. Saarinen worked to develop a building that would welcome customers rather than intimidate them.

Columbus has been home to many manufacturing companies, including Noblitt-Sparks Industries (which built radios under the Arvin brand in the 1930s) and Arvin Industries, now Meritor, Inc. After merging with Meritor Automotive on July 10, 2000, the headquarters of the newly created ArvinMeritor Industries was established in Troy, Michigan, the home of parent company, Rockwell International. It was announced in February 2011 that the company name would revert to Meritor, Inc. Cummins, Inc. is by far the region's largest employer, and the Infotech Park accounts for a sizable number of research jobs in Columbus proper. Just south of Columbus are the North American headquarters of Toyota Material Handling, U.S.A., Inc., the world's largest material handling (forklift) manufacturer. Other notable industries include architecture, a discipline for which Columbus is famous worldwide. The late J. Irwin Miller (then president and chairman of Cummins Engine Company) launched the Cummins Foundation, a charitable program that helps subsidize a large number of architectural projects throughout the city by up-and-coming engineers and architects.

Early in the 20th century, Columbus also was home to a number of pioneering car manufacturers, including Reeves, which produced the unusual four-axle Octoauto and the twin rear-axle Sextoauto, both around 1911.

Because Columbus is far enough from Indianapolis, it benefits tremendously from nearby commuters who recognize Columbus as a major city in its own right. Nearly 19,000 workers commute into the city from the surrounding townships and villages.

There were 17,787 households of which 33.5% had children under the age of 18 living with them, 48.5% were married couples living together, 11.7% had a female householder with no husband present, 4.5% had a male householder with no wife present, and 35.3% were non-families. 29.7% of all households were made up of individuals and 11.5% had someone living alone who was 65 years of age or older. The average household size was 2.43 and the average family size was 3.00.

There were 15,985 households out of which 31.8% had children under the age of 18 living with them, 51.9% were married couples living together, 11.0% had a female householder with no husband present, and 33.9% were non-families. 29.1% of all households were composed of individuals and 10.7% had someone living alone who was 65 years of age or older. The average household size was 2.39, and the average family size was 2.94. 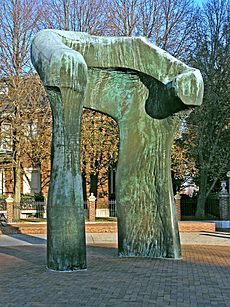 Columbus is a city known for its modern architecture and public art. J. Irwin Miller, 2nd CEO and a nephew of a Co-Founder of Cummins Inc., the Columbus-headquartered diesel engine manufacturer, instituted a program in which the Cummins Foundation paid the architects' fee, provided the client selected a firm from a list compiled by the company. The plan was initiated with public schools and was so successful that the foundation decided to offer to other non-profit and civic organizations. The high number of notable public buildings and public art in the Columbus area, designed by such individuals as Eero Saarinen, I.M. Pei, Robert Venturi, Cesar Pelli, and Richard Meier have led to Columbus earning the nickname "Athens on the Prairie." Seven buildings, built between 1942 and 1965, are National Historic Landmarks, and approximately 60 other buildings sustain the Bartholomew County seat's reputation as a showcase of modern architecture. National Geographic Magazine once devoted an article to the town's architecture.

In 2015 Landmark Columbus was created as a program of Heritage Fund - The Community Foundation of Bartholomew county. Its mission is to care for and celebrate the world-renowned design heritage of the Columbus area.

In May 2016 Landmark Columbus launched Exhibit Columbus as a way to continue the ambitious traditions of the past into the future. Exhibit Columbus features annual programming that alternates between symposium and exhibition years. The project was successfully piloted in 2014 when Jonathan Nesci created 100 unique aluminum tables in the exhibition "100 Variations," that responded to the design of Saarinen's First Christian Church.

Columbus boasts over 700 acres (280 ha) of parks and green space and over 20 miles of People Trails. These amenities, in addition to several athletic and community facilities, including Donner Aquatic Center, Lincoln Park Softball Complex, Hamilton Center Ice Arena, Clifty Park, Foundation for Youth/Columbus Gymnastics Center and The Commons, are managed and maintained by the Columbus Parks and Recreation Department.

All content from Kiddle encyclopedia articles (including the article images and facts) can be freely used under Attribution-ShareAlike license, unless stated otherwise. Cite this article:
Columbus, Indiana Facts for Kids. Kiddle Encyclopedia.