Bartholomew County is a county located in the U.S. state of Indiana As of 2015, the population was 81,162. The county seat is Columbus. The county was determined by the U.S. Census Bureau to include the mean center of U.S. population in 1900.

Bartholomew County was formed in southern Indiana February 12, 1821 and was named for Lt. Col. Joseph Bartholomew, wounded at the Battle of Tippecanoe. The site of the county seat was chosen on February 15, 1821 by a team of commissioners, who suggested the name Tiptona, in honor of John Tipton; on March 20, the name Columbus was adopted.

The current Bartholomew County courthouse was built from 1870 to 1874 by McCormack and Sweeney of Columbus at a cost of $225,000.

It was designed by architect Isaac Hodgson, who was born in Belfast, Ireland in 1826 and immigrated to the United States in 1848; he designed six Indiana courthouses, including the one in Henry County.

The courthouse is built largely of brick and has mansard roofs typical of the Second Empire French style. Its asymmetrical "L" shape allows it to face two major streets in Columbus. The inscription indicating the commissioners, architect and date is high up on the east facade. 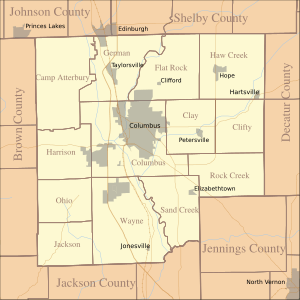 All content from Kiddle encyclopedia articles (including the article images and facts) can be freely used under Attribution-ShareAlike license, unless stated otherwise. Cite this article:
Bartholomew County, Indiana Facts for Kids. Kiddle Encyclopedia.