Hope is a town in Haw Creek Township, Bartholomew County, Indiana, United States, known for its historic character. The population was 2,102 at the 2010 census. It is part of the Columbus, Indiana, metropolitan statistical area.

The first settlement at Hope was made in 1830 by a colony of Moravians (people of the Protestant Moravian denomination) from Salem, North Carolina (now Winston-Salem), led by the Rev. Martin Hauser, after whom the town high school is named. Although a 1905 source claimed that the town was named for the optimistic spirit of its Moravian pioneer settlers, "Hope" is a common name for religious settlements, denoting hope in God's favor and the resurrection. The town was originally named Goshen, after the Biblical Goshen, but upon the establishment of a post office in 1834 the name was changed to Hope, as Indiana already had a town named Goshen. The town was founded to be a communal settlement like that of the two prominent Moravian settlements in the United States, Salem, North Carolina and Bethlehem, Pennsylvania. The model for these did not work for a farming community like Hope, and early on the decision was made to end community property and allow residents to own their own land. Soon thereafter the town was also opened to non-Moravians.

In the middle of the nineteenth century a Moravian day school was opened in Hope, and soon thereafter it was decided that the school should be transformed into a boarding school for young women, under the auspices of the Moravian Church. Guidance and funds were provided from the Moravian Church in Bethlehem, Pennsylvania, and the Hope Moravian Seminary for Young Ladies opened in 1866. A building, a house for the Principal and his family, and extensive grounds were situated on what is now Seminary Street. The school was run for thirteen years by the Rev. Francis R. Holland and his wife Augusta Holland, with a number of teachers, and offered a wide program of study, including Latin, English, French, German, Music, Drawing, Mathematics, Geography, History, and Natural History. Students came from a number of midwestern states. With so many teachers, the school had trouble making ends meet, and in 1879 the Bethlehem elders sent a second principal, the Rev. Jesse Blickensdorfer, to replace the first, in the hope that he could make the school profitable. He reduced the number of teachers to two, but this effort also failed and the seminary was closed in 1881. In later years the buildings were used for a Normal School, and then finally torn down. All that remains of the school are elaborate iron gates on the western side of Main Street, given by alumnae of the school in memory of the nature walks led by the Rev. Holland in the Spring Woods, entered where the gates stand.

Hope retains many other signs of its past, and the entire downtown district is on the National Register of Historic Places, known as the Hope Historic District. The history of the town can also be traced in the town's Yellow Trail Museum, which contains two floors of historical artifacts donated by the townspeople. The town is also home to the Rural Letter Carriers' Museum (currently undergoing removal and restoration), in honor of the fact that Hope has the oldest continuously running rural mail delivery in the nation, begun in 1896.

Hope's historic past is honored in Hope Heritage Days, held every year on the last full weekend in September.

Hope, Indiana was one of Indiana's smallest communities to still have its own newspaper, established in 1912 when two competing newspapers merged to create one weekly publication—the Hope Star-Journal. Upon the death of the editor in 2014, the Star-Journal converted to an online publication, at http://hsjonline.org/. 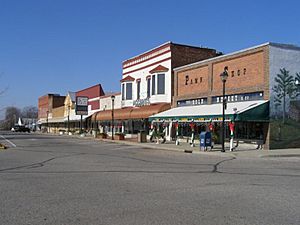 There were 787 households of which 37.2% had children under the age of 18 living with them, 52.0% were married couples living together, 13.9% had a female householder with no husband present, 5.5% had a male householder with no wife present, and 28.7% were non-families. 23.6% of all households were made up of individuals and 9% had someone living alone who was 65 years of age or older. The average household size was 2.64 and the average family size was 3.07.

There were 788 households out of which 40.5% had children under the age of 18 living with them, 57.6% were married couples living together, 11.9% had a female householder with no husband present, and 24.5% were non-families. 20.9% of all households were made up of individuals and 11.2% had someone living alone who was 65 years of age or older. The average household size was 2.72 and the average family size was 3.13.

The town of Hope has a strong sense of history, as reflected in its Yellow Trail Museum, its location as the site of the Haw Creek branch of the Bartholomew County Historical Society, its annual Heritage Days celebration, and a number of other traditional celebrations. The downtown Hope Historic District encompasses many nineteenth-century brick buildings and old houses, as well as one of Hope's original log cabins. Adjacent to the current school is the historic Simmons School, a one-room schoolhouse in use from 1879-1907, where events and reenactments are now held.

The town has an Art Guild, a non-profit foundation housed at 645 Harrison Street, which promotes local art and artists. The town has also joined in the movement to display "barn quilts," paintings of quilt squares on the sides of buildings, based originally on the hex squares, a type of Pennsylvania Dutch folk art traditionally painted to bring luck.

Hope has the only remaining Moravian church in the state of Indiana, and many of the traditional Moravian practices are also preserved, such as the display of the "putz," or elaborate Christmas scene in miniature, in the church at Christmastime, the tradition of hanging Moravian stars, and the making of Moravian sugar cakes, a type of sweet raised coffee cake widely sold at local festivals.

A more recent Mennonite presence in Hope has brought traditional Mennonite foods to local stores. Combined with the area's fresh produce and the Simmons Winery, an effort is being made to promote Hope as a center of good food traditions. A farmer's market currently runs on the town square on Friday late afternoons, from June to September. In addition a variety of fresh produce is sold from yards, farmstands, or trucks, in true rural style.

Hope is also the center of the annual Hope Ride, a bicycling event that raises funds for charity. The Hope Ride takes place each year in September, when hundreds of cyclists converge on Hope to ride short or long country loops that take in a variety of scenic features such as historic barns, churches, bridges, monuments, and a local winery.

All content from Kiddle encyclopedia articles (including the article images and facts) can be freely used under Attribution-ShareAlike license, unless stated otherwise. Cite this article:
Hope, Indiana Facts for Kids. Kiddle Encyclopedia.