Edinburgh is a city in Bartholomew, Johnson, and Shelby counties in the U.S. state of Indiana. The population was 4,480 at the 2010 census. It is part of the Columbus, Indiana metropolitan statistical area. Edinburgh was named in honor of Edinburgh, Scotland and for many years was pronounced the same way.

Edinburgh is the home of Camp Atterbury, a National Guard training facility. The Big Blue River and Sugar Creek join to form the Driftwood River 1 mi (1.6 km) west of Edinburgh.

Edinburgh was laid out in about 1822. A founder of the town being a native of Scotland may have caused the name Edinburgh to be selected. The Edinburgh post office has been in operation since 1823. 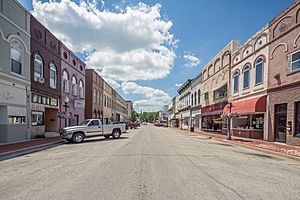 Severe thunderstorms formed rapidly across Central Indiana on the evening of June 3, 2008. These storms began to rotate and produced multiple tornadoes. One of these tornadoes traveled across northern sections of Brown County and southern sections of Johnson County. This tornado did considerable damage to the Camp Atterbury facility. The tornado exited Camp Atterbury and crossed US 31, entering the town of Edinburgh. Several buildings and countless trees and power lines were damaged as the tornado moved roughly parallel with Indiana 252. The tornado lifted near Interstate 65. The National Weather Service rated this damaging event as an EF-2 tornado.

Several bouts of severe thunderstorm activity and heavy rainfall affected the Edinburgh area in early June 2008. The Big Blue River and Sugar Creek overflowed their banks as a result of this activity. However, the worst of the weather was to come. A line of severe thunderstorms moved across Central Indiana on the evening of June 6, 2008. These storms began to move south out of Edinburgh, weakening as daylight was lost. However, strong surface winds began to interact with a leftover outflow boundary from the earlier severe activity. As a result, new thunderstorm activity began to blossom and move to the east. This interaction produced what is known as a training effect, with thunderstorm after thunderstorm moving over the same area.

The first rainfall began to fall in Edinburgh at approximately 9:00 PM on the evening of June 6. The torrential rain would last until 12:00 PM on June 7. An unofficial rainfall total of 10.71 inches (272 mm) was measured in Edinburgh. Official National Weather Service rainfall totals across Central Indiana during this period ranged from 3.09 inches (78 mm) to 9.85 inches (250 mm). This water had no place to go as it struck the already saturated grounds, so runoff was extremely high. The Big Blue River and Sugar Creek began to rise rapidly. Runoff quickly flooded agricultural areas and much of this water made its way into several subdivisions in Edinburgh. Many homes were flooded with several feet of water. US 31, SR 252, and Interstate 65 were all flooded at the height of the flood, essentially cutting Edinburgh off from surrounding areas.

Residents are zoned to the Edinburgh Community School Corporation.

The town has a lending library, the Edinburgh Wright-Hageman Public Library.

All content from Kiddle encyclopedia articles (including the article images and facts) can be freely used under Attribution-ShareAlike license, unless stated otherwise. Cite this article:
Edinburgh, Indiana Facts for Kids. Kiddle Encyclopedia.