Nickelodeon Magazine was an American children's magazine inspired by the children's television network Nickelodeon. Its first incarnation appeared in 1990 and was distributed at participating Pizza Hut restaurants; this version of the magazine only saw two issues. The magazine returned in the summer of 1993 with different types of content, primarily humor and comics. Originally published on a quarterly basis, it switched to bi-monthly with the February/March 1994 issue. It then went to ten times per year starting March 1995, with a bi-annual December/January and June/July issue until its end in 2009.

For most of its run, the magazine's editor-in-chief was Laura Galen. She wrote the goodbye message for the 159th and final issue in 2009. 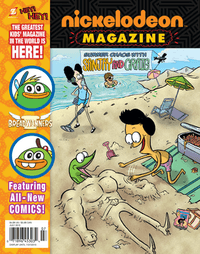 In spite of being related to the network it was named after, Nickelodeon Magazine covered all sorts of topics, not just what was on the network. The magazine contained informative non-fiction pieces, humor, interviews, comics, pranks and recipes (such as green slime cake). The magazine's mascot was Zelda Van Gutters, a Lakeland Terrier dog who appeared throughout the magazine with sarcastic asides on the articles. She was also the star of the magazine's semi-regular photo comic strip "Ruffing It".

In addition, Nickelodeon Magazine's Comic Book also featured comics from characters of the network's programming, which usually appeared just before a season premiere or special film event for the property on the actual series. Among the shows featured in the Comic Book were:

A British version of the magazine was published from 16 February 2011 as a collaboration between Nickelodeon and D. C. Thomson & Co. It seems to have been discontinued as of June 2012.

Viacom ended operations of the magazine in June 2009 due to economic conditions and the continual move of the network's content to their website. The title continued to publish until the December/January 2010 issue, and the final issue featured an editorial from magazine SVP/Editorial Director Laura Galen thanking the magazine's readers. On February 5, 2015, Papercutz announced that they have worked a deal with Nickelodeon to revive the magazine. The new version was released in June 2015 and ended in 2016.

All content from Kiddle encyclopedia articles (including the article images and facts) can be freely used under Attribution-ShareAlike license, unless stated otherwise. Cite this article:
Nickelodeon Magazine Facts for Kids. Kiddle Encyclopedia.