The series was originally conceived as an animated short from DiRaffaele's efficiency apartment in Studio City, Los Angeles along with Borst. The two had previously met in Burbank while working on an animated series, Mad, in 2012. Originally a one-off, Breadwinners premiered at a short film festival held at a bar in New York City, and later was linked to the network, where they were contacted and the show was developed into a full-fledged series. It premiered as a special preview on February 17, 2014. After the series was cancelled in 2016, the show continued to air reruns on Nicktoons until December 3, 2020. The series is about two anthropomorphic flightless green Ducks twins named Sway sway and Buhdeuce (SwaySway Voiced by Robbie Daymond and Buhdeuce voiced by Eric Bauza).

Two anthropomorphic, flightless ducks named SwaySway (Robbie Daymond) and Buhdeuce (Eric Bauza), who are best friends, fly around the water-based planet Pondgea in a rocket-powered van delivering bread to the citizens. SwaySway, tall, thin and green, is the leader of the duo, and although he does not always use the best judgment, he is quite skilled at flying the van. Buhdeuce, short, round and green, is klutzier, but is also an enthusiastic and a loyal assistant to SwaySway. Often, when they get in over their heads, they will "level up," or transform (in a similar vein to video game characters) into a variety of forms they need to solve their problems. 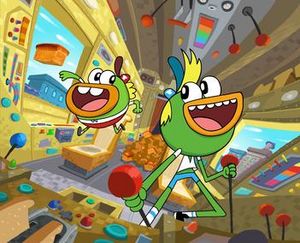 Breadwinners was created by Gary "Doodles" DiRaffaele and Steve Borst. It was conceived as a four-and-a-half minute animated short from DiRaffaele's efficiency apartment in Studio City, Los Angeles (dubbed the "Doodle Chamber"). The two had previously met in Burbank while working on an animated series, Mad, in 2012. The protagonists, originally unnamed, were drawn by DiRaffaele as part of a collaboration with Borst. Both were drawn tossing a piece of bread up in the air; DiRaffaele explained that the premise came as an extension of his appetite for bread, a staple of meals from his Italian-American upbringing, with friends sometimes calling him a "duck". The latter responded positively to the drawing, saying that he could produce something from it.

The short was written by Borst and produced by DiRaffaele in Adobe Flash over the course of two months. Daymond, who provides the voice of SwaySway, was found on a casting call website and invited into the apartment of DiRaffaele to audition. Originally a one-off, Breadwinners premiered at the Midsummer Night Toons short film festival in New York City, where they wanted to entertain their colleagues. The short was uploaded to YouTube to positive reception, and after obtaining 10,000 to 15,000 views on its first week, Borst explained, "it just took on a life of its own." The creators linked it to Nickelodeon after users expressed wanting more. Upon receiving an inquiry from a Nickelodeon executive, DiRaffaele was doubtful of the offer, joking that he "thought it was spam". After several months, the creators were hired to expand the short into a full-fledged series.

Actions in the series play out metronomically—that is, episodes are built around an underlying soundtrack, scored by Tommy Sica (who used to play in a band with DiRaffaele) and recorded before the animation phase. This process entails events in the show unfolding at a faster rate than most animated series like it. Test audiences composed of children were shown to "bounce" accordingly to the beat. Animation is outsourced to Canada through a Titmouse, Inc. studio in Vancouver; like the short, it is also produced in Adobe Animate. A cartoony look was explicitly chosen as the art style, DiRaffaele noted, which gave way for elements such as dark, heavy outlines around the characters. In addition, retro-style video games were the inspiration for the art direction, with a pixel texture applied to backgrounds and the character's shadows.

All content from Kiddle encyclopedia articles (including the article images and facts) can be freely used under Attribution-ShareAlike license, unless stated otherwise. Cite this article:
Breadwinners (TV series) Facts for Kids. Kiddle Encyclopedia.