Seymour is a city in Jackson County, Indiana, United States. Its population was 17,503 at the 2010 census.

The city is noted for its location at the intersection of two major north/south and east/west railroads, which cross each other in the downtown area. The north/south line (the Jeffersonville, Madison and Indianapolis Railroad) was built in the 1840s and connected Indianapolis to the Ohio River at Jeffersonville. In 1852, Capt. Meedy Shields persuaded John Seymour into building the east/west railroad (the Ohio and Mississippi Railroad) through his land, and in return named the city in Seymour's honor.

The companies Aisin USA and Rose Acre Farms are headquartered in Seymour, and Cummins operates a plant in the area. The city is also home to the second largest high school gymnasium in the United States.

The climate in this area is characterized by hot, humid summers and generally mild to cool winters. According to the Köppen Climate Classification system, Seymour has a humid subtropical climate, abbreviated "Cfa" on climate maps. 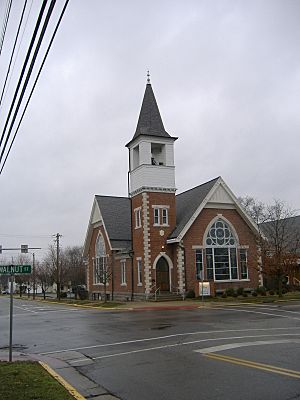 There were 6,907 households, of which 34.4% had children under the age of 18 living with them, 45.3% were married couples living together, 13.5% had a female householder with no husband present, 6.5% had a male householder with no wife present, and 34.6% were non-families. 28.1% of all households were made up of individuals, and 9.8% had someone living alone who was 65 years of age or older. The average household size was 2.49 and the average family size was 3.01. 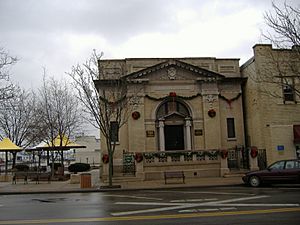 Seymour was laid out and platted in 1852.

Seymour was the site of the World's first train robbery, in which the train was moving. It was committed by the local Reno Gang, on October 6, 1866 just east of town. The gang was put into prison for the robbery, and later lynched at Hangman's Crossing outside town.

The Freeman Field Mutiny occurred in 1945, in which African-American members of the 477th Bombardment Group attempted to integrate an all-white officers' club at Freeman Army Air Corps Base. The mutiny later led to the integration of the United States military.

Seymour has a public library, a branch of the Jackson County Public Library.

All content from Kiddle encyclopedia articles (including the article images and facts) can be freely used under Attribution-ShareAlike license, unless stated otherwise. Cite this article:
Seymour, Indiana Facts for Kids. Kiddle Encyclopedia.