Jeffersonville is a city in Clark County, Indiana, along the Ohio River. Locally, the city is often referred to by the abbreviated name Jeff. It is directly across the Ohio River to the north of Louisville, Kentucky, along I-65. The population was 44,953 at the 2010 census. The city is the county seat of Clark County. 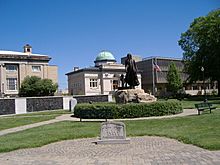 Spring St is the main shopping area in downtown

In 1786 Fort Finney was situated where the Kennedy Bridge is today to protect the area from Indians, and a settlement grew around the fort. The fort was renamed in 1791 to Fort Steuben in honor of Baron von Steuben. In 1793 the fort was abandoned. Precisely when the settlement became known as Jeffersonville is unclear, but it was probably around 1801, the year in which President Thomas Jefferson took office. In 1802 local residents used a grid pattern designed by Thomas Jefferson for the formation of a city. On September 13, 1803, a post office was established in the city. In 1808 Indiana's second federal land sale office was established in Jeffersonville, which initiated a growth in settling in Indiana that was further spurred by the end of the War of 1812.

In 1813 and 1814 Jeffersonville was briefly the de facto capital of the Indiana Territory, as then-governor Thomas Posey disliked then-capital Corydon, and wanting to be closer to his personal physician in Louisville, decided to live in Jeffersonville. However, it is debated by some that Dennis Pennington had some involvement to his location to Jeffersonville. The territorial legislature remained in Corydon and communicated with Posey by messenger.

In 1825, General Lafayette visited Jeffersonville on his United States tour.

The Civil War increased the importance of Jeffersonville, as the city was one of the principal gateways to the South during the war, due to its location directly opposite Louisville. It was served by three railroads from the north and had the waterway of the Ohio River. This factor influenced its selection as one of the principal bases for supplies and troops for the Union Army. Operating in the South, the Louisville and Nashville Railroad furnished the connecting link between Louisville and the rest of the South. Camp Joe Holt was instrumental in keeping Kentucky within the Union. The third largest Civil War hospital, Jefferson General Hospital was located in nearby Port Fulton (now within Jeffersonville) from 1864 to 1866, as it was close to the river and Louisville. The original land was seized by the federal government from the Honorable Jesse D. Bright, United States Senator, a sympathizer of the Confederate cause. During the war it housed 16,120 patients in its 5,200 beds and was under the command of Dr. Middleton Goldsmith. A cemetery was built for fallen soldiers down the hill, but the wooden grave markers had decayed by 1927, causing the Jeffersonville city council to build a ball field over the cemetery, and not bothering to move the graves, located on Crestview Avenue. The Jeffersonville Quartermaster Intermediate Depot had its first beginning in the early days of the Civil War, near its present location.

By 1870, 17% of Jeffersonville residents were foreign-born, mostly from Germany. During the 1920s, Jeffersonville was a popular gathering place for the Ku Klux Klan, as Louisville and New Albany had strong anti-Klan laws and Jeffersonville did not.

City Hall in the Quadrangle complex

During World War II, the Quartermaster Depot, in conjunction with Fort Knox, Kentucky housed German prisoners of war until 1945. Now the Depot is used as a shopping center.

Part of Jeffboat in Jeffersonville. Jeffboat is the largest inland shipbuilder in the U.S.

On February 5, 2008 the city of Jeffersonville officially annexed four out of six planned annex zones. The proposed annexation of the other two zones was postponed due to lawsuits. The areas annexed added about 5,500 acres (22 km2) to the city and about 4,500 citizens, raising the population to an estimated 33,100. The total area planned to be annexed is 7,800 acres (32 km2). The annexed areas receive planning and zoning, building permits and drainage issues services immediately, with new in-city sewer rates which are lower. Other services are being phased in such as police and fire and will work jointly with the pre-existing non-city services until they are available. One of the other two areas remaining to be annexed was Oak Park, Indiana an area of about 5,000 more citizens.

The Clark County Courts dismissed the lawsuits against the city on February 25, 2008. This dismissal brings the remaining Oak Park area into the city. The population of the city is now expected to be nearly 50,000 citizens and is the largest annexation in Jeffersonville's history.

In February 2011, Kentucky governor Steve Beshear and Indiana Gov. Mitch Daniels announced that the two states, along with the City of Jeffersonville, would allocate $22 million in funding to complete the Big Four Bridge project – converting an abandoned railroad bridge into a pedestrian and bicycle path to linking Louisville's Waterfront Park and downtown Jeffersonville. Indiana spent $8 million and the City of Jeffersonville spent an extra $2 million in matching funds to pay for construction of a ramp to the Big Four Bridge on the Indiana side.

In July 2012, Jeffersonville City officials unveiled plans for an $8 million plaza, named "Big Four Station", to surround the new ramp. The plaza opened in 2014 and includes a covered playground, fountain, stage, pavilion and plenty of green space. The project has pulled thousands of pedestrians a week into downtown Jeffersonville's main shopping district and has spurred further development. A Marriott motel is under construction and urban apartments have been proposed adjacent to the park.

Jeffersonville is home to the United States Bureau of the Census's National Processing Center, which is the bureau's primary center for collecting, capturing, and delivering data. The facility is one of southern Indiana's largest employers.

All content from Kiddle encyclopedia articles (including the article images and facts) can be freely used under Attribution-ShareAlike license, unless stated otherwise. Cite this article:
Jeffersonville, Indiana Facts for Kids. Kiddle Encyclopedia.