Kids Encyclopedia Facts
Not to be confused with John F. Kennedy Boulevard Bridge.

The John F. Kennedy Memorial Bridge is a six-lane, single-deck cantilever bridge that carries southbound Interstate 65 across the Ohio River, connecting Louisville, Kentucky and Jeffersonville, Indiana. The main span is 700 feet (213 m) (two spans) and the bridge has a total length of 2,498 feet (761 m). The span carries six southbound lanes. It is named after U.S. President John F. Kennedy.

Designed by the Louisville engineering firm of Hazelet & Erdal, construction began in the spring of 1961 and completed in late 1963 at a cost of $10 million. The span was unnamed when U.S. President John F. Kennedy was assassinated on November 22, 1963. Four days later, Kentucky Governor Bert T. Combs announced that there was wide agreement that the bridge would be named in Kennedy's honor. The bridge was dedicated and opened for northbound traffic on December 6, and southbound traffic began flowing a few weeks later.

Between the late 1990s and 2006, the bridge was covered with rust-like spots and the Kentucky Transportation Cabinet had failed in attempts to rectify this, a subject of local controversy. The state twice paid contractors to repaint the bridge who then failed to do so. The attempts cost over $23 million, with little apparent result. The first of the two contracts, awarded in 1999, ended two years later in a bribery scandal that resulted in criminal prosecution.

In October 2006, the state awarded a $14.7 million contract to Intech Contracting of Lexington to paint half the bridge by the summer of 2007. The new contract differed in that the project was split in two, and the original plans for a three color paint scheme were replaced with a simpler all beige colored one. The very southernmost portion of the bridge was completed in three colors (brown, beige, and green), although this will be painted over. 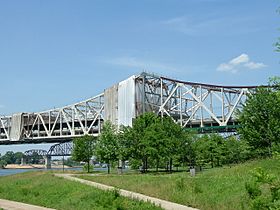 The bridge during the last repainting project. Note the far right part of the bridge painted in a three color scheme, originally planned for the whole bridge. This scheme was abandoned and the entire bridge was painted in a light grey.

In 2013, Kentucky broke ground on a second span as part of the Ohio River Bridges Project, a project to relieve traffic congestion in the Louisville area. The Abraham Lincoln Bridge, a cable-stayed bridge that opened in December 2015, carried all Interstate 65 traffic over the Ohio River while the Kennedy Bridge received a new deck. The Kennedy Bridge now carries six lanes of southbound I-65 traffic, while the Lincoln Bridge carries six lanes of northbound I-65 traffic. The Kennedy Bridge reopened in three phases during the final months of 2016. The first phase saw one lane reopen on September 30 for traffic traveling from surface streets in Jeffersonville to I-65. In the second phase, which took effect on October 10, the bridge reopened for I-65 through traffic, carrying five lanes of southbound traffic; at the same time, the Lincoln Bridge began carrying only northbound traffic. The final phase was the reopening of the exit ramp from the bridge to westbound I-64, which had been closed for nearly a year, on November 14. Tolling began in December 2016.

All content from Kiddle encyclopedia articles (including the article images and facts) can be freely used under Attribution-ShareAlike license, unless stated otherwise. Cite this article:
John F. Kennedy Memorial Bridge Facts for Kids. Kiddle Encyclopedia.