Charlestown is a city in Clark County, Indiana, United States. The population was 7,585 at the 2010 census. 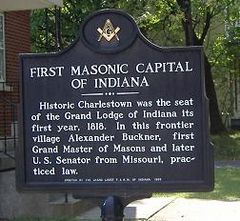 Charlestown was established in 1808, named after one of its surveyors, Charles Beggs, upon 300 acres (1.2 km2), of which 3 acres (12,000 m2) was designated for a town square. It was established one mile (1.6 km) northeast of Springville, and was responsible for Springville's demise.

Milling was important to the town, as the first mill was built in the area, on Fourteen Mile Creek, in 1804. This mill would be abandoned when John Work built a mill by use of a tunnel in 1814. Today, that mill is part of the Tunnel Mill Scout Reservation.

In 1818 the first Grand Lodge of Free & Accepted Masons in Indiana met in Charlestown, due to Jonathan Jennings' influence.

In 1940 the population of Charlestown was 900, but it swelled to 13,400 due to the building and operation of the Indiana Army Ammunition Plant (INAAP). This created a housing problem, as chicken, wood, and wash houses had to house all the new residents who flocked to the area for the jobs created by the INAAP. Additional problems caused by the rapid influx of new residents was improper sanitation at restaurants, inefficient sewers, gambling, panhandling, and diseases such as typhoid and malaria.

In 2014 the city announced they would be applying for a grant to redevelop Pleasant Ridge Subdivision, an impoverished area within the city. Some residents of the Pleasant Ridge Subdivision formed an association to fight against demolishing their homes via eminent domain. The City Council did not call for a vote on the issue and the grant issue failed. Starting in 2016 the city was accused of using excessive fines against homeowners in the subdivision in order to force them to sell to a private developer.

There were 2,884 households of which 39.7% had children under the age of 18 living with them, 46.7% were married couples living together, 17.9% had a female householder with no husband present, 5.9% had a male householder with no wife present, and 29.5% were non-families. 24.3% of all households were made up of individuals and 9.4% had someone living alone who was 65 years of age or older. The average household size was 2.63 and the average family size was 3.09.

There were 2,341 households out of which 37.0% had children under the age of 18 living with them, 45.9% were married couples living together, 18.5% had a female householder with no husband present, and 31.0% were non-families. 26.4% of all households were made up of individuals and 9.9% had someone living alone who was 65 years of age or older. The average household size was 2.56 and the average family size was 3.03.

The Charlestown Parks and Recreation Department strives to create lasting family memories and promote wellness for the residents of the City of Charlestown by providing family friendly activities, events and recreation facilities. The Parks and Recreation Department operates the Arts and Enrichment Center, the Greenway Park Concession Stand and the city's community computer labs.

The Charlestown Parks and Recreation Department has hosted a variety of activities at Greenway Park since the completion of the concession stand in Greenway Park in the spring of 2009. Some of these activities include: Movies in the Park, Music in the Park, and a Back-to-School Bash. The Parks and Recreation Department also coordinates the city's annual celebration of Christmas, including Light Up Charlestown and the city's Christmas displays. Each year, the city converts the city square along Main Street into a Christmas village, with festive light displays and activities, earning Charlestown its reputation as the Christmas City of Southern Indiana.

The Parks and Recreation Department is supervised and directed by Rhonda Davidson.

The Parks Department also operates the Charlestown Family Activity Center. During Christmas in Charlestown, the Family Activities Park, located at 1000 Park Street across from Charlestown High School's Dutch Reis Field, is transformed into a Wonderland of Fun. Lights are omnipresent at the Park, including an animated light show just for the children. You can ice skate in the middle of a festive atmosphere, fill your bellies at the concession stand and board the train for an excursion through Charlestown's Festival of Lights. Try to imagine the Family Activities Park transformed into a lighted Christmas Wonderland with ice skating and a train waiting at the depot to be boarded for a trip through Charlestown's menagerie of lights. The Family Activities Park is open 6:00 p.m. through 9:00 p.m. Monday through Saturday, but is closed on December 24 and 25.

Christmas in Charlestown is one of the biggest events in Southern Indiana in the winter seasons. There are Carriage Rides, a Christmas Parade, Breakfast with Santa, and Christmas lights. Charlestown has an animated light on the city square, lights throughout Greenway Park and all around the city. In 2013, Charlestown added a festive display at the new Family Activities Park, 1000 Park Street, across from Charlestown High School's Dutch Reis Football Field and train rides on the Charlestown Express.

Light Up Charlestown is the kick-off of the event in Charlestown. The day after Thanksgiving, festivities begin around 6:00 p.m. in Greenway park with an hour-long program leading up to the flipping of the switch to bring the lights on all over town.

In 2013, Christmas in Charlestown added Ice Skating to the many activities available during the holiday season. Beginning November 29 and lasting through December 31st the Skating Rink at the Charlestown Family Activities Park is converted into a winter wonderland for ice skaters. Charlestown also added the Christmas Express, which transports riders to different parts of Charlestown to enjoy the festivities.

All content from Kiddle encyclopedia articles (including the article images and facts) can be freely used under Attribution-ShareAlike license, unless stated otherwise. Cite this article:
Charlestown, Indiana Facts for Kids. Kiddle Encyclopedia.