Kids Encyclopedia Facts
Not to be confused with Madison County, Indiana.

Madison is a city in and the county seat of Jefferson County, Indiana, United States, along the Ohio River. As of the 2010 United States Census its population was 11,967. Over 55,000 people live within 15 miles (24 km) of downtown Madison. Madison is the largest city along the Ohio River between Louisville and Cincinnati. Madison is one of the core cities of the Louisville-Elizabethtown-Madison metroplex, an area with a population of approximately 1.5 million. In 2006, the majority of Madison's downtown area was designated the largest contiguous National Historic Landmark in the United States—133 blocks of the downtown area is known as the Madison Historic Landmark District.

The climate in this area is characterized by hot, humid summers and generally mild to cool winters. According to the Köppen Climate Classification system, Madison has a humid subtropical climate, abbreviated "Cfa" on climate maps.

Historic buildings line the north side of Main Street in Madison.

Madison was laid out and platted in 1810, and the first lots were sold in 1811 by John Paul. It had busy early years due to heavy river traffic and its position as an entry point into the Indiana Territory along the historic Old Michigan Road. Madison's location across the Ohio River from Kentucky, a slave state, made it an important location in the Underground Railroad, which worked to free fugitive slaves. George DeBaptiste's barbershop in town became a nerve center of the local group.

Indiana's first railroad, the Madison & Indianapolis Railroad, was built there from 1836 to 1847. Chartered in 1832 by the Indiana State Legislature as the Madison Indianapolis & Lafayette Railroad, and construction begun September 16, 1836, the railroad was transferred to private ownership on January 31, 1843, as the Madison & Indianapolis Railroad. Successful for more than a decade, the railroad went into decline and was sold at foreclosure in 1862, renamed the Indianapolis & Madison Railroad, and after a series of corporate transfers, became part of the massive Pennsylvania Railroad system in 1921. In March 1924, the Madison Area Chamber of Commerce was founded to aid area business growth and development.

Madison's days as a leading Indiana city were numbered, however, when river traffic declined and new railroads built between Louisville, Indianapolis, and Cincinnati tapped into Madison's trade network. As a result, Madison's growth did not continue at the same pace it had experienced before the Civil War. During the late nineteenth century, many new buildings were still being built, but, in many cases, older structures were modernized by adding cast iron store fronts and ornamental sheet metal cornices. Some earlier buildings survived without major alterations, and the Madison's National Landmark Historic District today contains examples of all the major architectural styles of the nineteenth and early twentieth centuries, from Federal to Art Moderne.

Downtown Madison was granted National Historic Landmark District status in early 2006. On August 25, 2006, just months after the designation, a blaze severely damaged two historic downtown buildings, the Madison Elks Lodge and a former city hall building that was occupied by an insurance company. 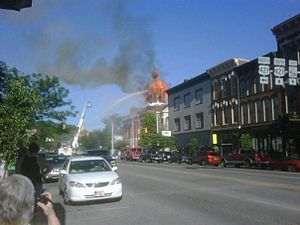 On May 20, 2009, the newly painted dome of the Jefferson County Courthouse caught fire. The blaze started around 6:15 pm. Smoke billowed hundreds of feet in the air and flames rose out of the clock tower. The fire continued to burn for hours. Fire officials reported that the fire was tentatively under control just before 9:45 pm. No major injuries were reported. The dome of the courthouse was being painted in celebration of Madison's bicentennial. On May 28, 2009, the ruined dome was removed from the top of the courthouse in two pieces. Authorities stated that the cause of the fire was a contractor using an open-flame propane torch to solder two pieces of copper together in one of the built-in gutters on the north side of the roof.

The 1974 Super Outbreak is the second-largest tornado outbreak on record for a single 24-hour period. From April 3 to April 4, 1974, there were 148 tornadoes confirmed in 13 states, including Illinois, Indiana, Michigan, Ohio, Kentucky, Tennessee, Alabama, Mississippi, Georgia, North Carolina, Virginia, West Virginia, and New York; and the Canadian province of Ontario. It extensively damaged approximately 900 square miles (2,300 km2) along a total combined path length of 2,600 miles (4,200 km). The 1974 Super Outbreak remains the most outstanding severe convective weather episode of record in the continental United States. The outbreak far surpassed previous and succeeding events in severity, longevity and extent.

Shortly after an F-5 tornado struck Depauw, northwest of Louisville, the Hanover/Madison F4 twister formed near Henryville and traveled through Jefferson County, leveling many structures in the small towns of Hanover and Madison. Eleven were killed in this storm while an additional 300 were injured. According to WHAS-TV in Louisville, 90% of Hanover was destroyed or severely damaged, including the Hanover College campus. Despite the fact that no one was killed or seriously injured at the college, all but one of the college's 33 buildings were damaged, including two that were completely destroyed and six that sustained major structural damage. Hundreds of trees were downed, completely blocking every campus road. All utilities were knocked out and communication with those off campus was nearly impossible. Damage to the campus alone was estimated at about $10 million. In Madison, seven fatalities took place, about 300 homes were destroyed; the tornado also brushed the community of China, causing additional fatalities.

The same storm would later strike the Cincinnati area, producing multiple tornadoes including another F5.

Madison has a powerboat racing tradition dating back to at least 1911. In 1929, the city began holding an annual race, later called the Madison Regatta beginning in 1948. Since 1954, the Madison Regatta has held a high points Unlimited hydroplane race annually in early July. Although Madison has a population of only 12,000, the Regatta maintains its place in Unlimited Hydroplane racing hosting an Air National Guard H1 Unlimited Series race, whose other events are in Detroit, Seattle, San Diego, Evansville, and Tri-Cities, Washington. The Madison Regatta draws about 70,000–100,000 people annually and is held on July 4 weekend. A week-long riverfront festival also surrounds this racing event.

A source of community pride is that Madison has the world's only community-owned unlimited hydroplane racer, Miss Madison, which began Unlimited class racing in 1961. The boat, which has been known by various corporate sponsor names but was officially called U-6, traditionally finished near the bottom of the circuit. Before Anheuser-Busch dropped its sponsorship of hydroplane racing after the 2004 season, U-6 had won just six races using a variety of hulls. One of those wins was an upset in the 1971 Regatta, when by a mistake in the bidding process, the APBA Gold Cup was held in Madison for the first time, in which the low-budget team and its 1960-vintage hull defeated the well-funded corporate teams and their newer generation of "Thunderboats". The Gold Cup winner retired at the end of the year, taking second place in the overall national standings, and was replaced with a new Miss Madison in 1972. Newer hulls followed in 1978 and 1988. Madison hosted the APBA Gold Cup Race again in 1979 and 1980.

As a participant in the new H1 Unlimited series, the City of Madison team driver, Steve David, finished first in the H1 Unlimited national point drivers standings in both 2005 and 2006 driving U-6, now in the colors of sponsor Oh Boy! Oberto. In 2008, under the aegis of Miss Madison Incorporated and with a new hull built in 2007, the U-1 Miss Madison won its first H1 Unlimited National High Points Championship for Oh Boy! Oberto. On July 3, 2011, at Madison, David escaped serious injury but the hull was seriously damaged when the three-time defending national champion crashed into the U-96 Spirit of Qatar on the third lap of the championship heat after Qatar spun in a turn into the path of the Oh Boy! Oberto/Miss Madison. David and the repaired boat returned in time for the 2011 Columbia Cup, where it finished second (to U-96), then won the August 7 Albert Lee Cup in Seattle. In true Miss Madison tradition, the repairs to the hull are being defrayed by local fundraisers.

The Miss Madison's greatest accomplishment, when it seemingly came from out of nowhere to win the 1971 Gold Cup with an aged boat against powerful competitors such as Atlas Van Lines II and Miss Budweiser, was recreated in the semi-fictional film Madison.

In 2013, Miss Madison/ Oh Boy! Oberto driver Steve David announced his retirement after his final run at the San Diego Sea Fair. On Friday, November 8, 2013 a retirement celebration was held at the Boneyard Grill on Madison's hilltop to celebrate David's 12-year tenure as the driver of Miss Madison's Oh Boy! Oberto.

Two Hollywood films have been shot in Madison. In the summer of 1957 it was selected as the location for Some Came Running, which brought actors Frank Sinatra, Dean Martin and Shirley MacLaine to town. The film was nominated for five Academy Awards. Released in 2001, the city of Madison was both the subject and location for the film Madison. It brought notable stars as Jim Caviezel, Bruce Dern, Paul Dooley and Mary McCormack to town.

For Some Came Running, released in 1958, director Vincente Minnelli selected Madison to represent the fictional town of Parkman in filming the James Jones novel. On September 3, 1999, the community held an organized celebration to mark the 40th anniversary of the making of the film, which itself became the subject of a film documentary by Turner Classic Movies.

Madison was released in 2001 and recounts the story of the city's hosting and winning the penultimate hydroplane racing event of 1971, echoing the movie Hoosiers.

Madison has a branch of the Jefferson County Public Library.

All content from Kiddle encyclopedia articles (including the article images and facts) can be freely used under Attribution-ShareAlike license, unless stated otherwise. Cite this article:
Madison, Indiana Facts for Kids. Kiddle Encyclopedia.