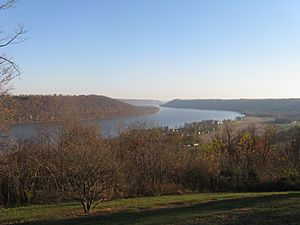 View of the Ohio River from the Point in Hanover.

During the late eighteenth century, the area today known as the state of Indiana was a part of the Northwest Territory, which originally consisted of the later states of Ohio, Indiana, Michigan, Illinois, Wisconsin, and parts of Minnesota. At that time, there were few European settlements on the northern bank of the Ohio River. Kentucky, on the southern banks of the Ohio, originally included as a part of Virginia, and in 1792 granted statehood, was more densely settled by Europeans. It is likely that prior to the early nineteenth-century European settlement of the Hanover area, its predominant inhabitants were Shawnee.

Captain George Logan (1780-May 12, 1875) grew up in a farming household in the area of Lexington, Kentucky. In the late winter of 1801, young Logan loaded a barge with produce and embarked on a journey westward on the Ohio River, ultimately to sell the produce in New Orleans. At the time, he later noted, there were no European settlements in the area between present-day Carrollton, Kentucky and Louisville. According to Logan, both banks of the river were covered in thick forest. He also reported seeing Native American hunters and fishermen, a large number of buffalo and deer, and heard the cries of coyotes.

Faced with heavy winds and harsh weather towards the end of February, Logan was forced to stop his procession. He stopped his barge roughly a half mile west of the present-day area of Hanover Beach. After waiting for several days, he reportedly grew bored and decided to head ashore. Present-day Hanover is located on a hill overlooking the river valley below. Armed with a rifle, Logan decided to explore and he climbed this hill to the spot today known as Logan's Point. This was the first recorded instance of a European exploring the area of Hanover. Logan was so enamored with the view from atop Logan's Point that he resolved he would some day move there. He carved his initials on a beech tree along with the date, March 1, 1801. It would be another fourteen years before he would return to settle permanently. 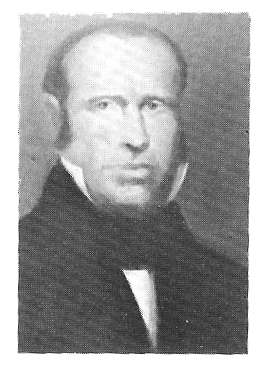 Williamson Dunn, founder of Dunn's Settlement, which would later come to be known as Hanover

Judge Williamson Dunn, from Mercer County, Kentucky, purchased the land area of modern Hanover from the federal government on November 28, 1808. The following year, Dunn resettled his entire family to the area, and they became the first residents of a town called "Dunn's Settlement," which would later come to be known as Hanover. A steady flow of settlers then followed, most of whom were Scotch-Irish Presbyterians. These early settlers had largely emigrated from Ireland to Virginia, then to Kentucky, and finally to the area of Hanover. Among these early settlers in Dunn's Settlement was Christopher Harrison, who would later serve as Indiana's first lieutenant governor and would play a key role in the planning of the state capital in Indianapolis. Harrison built a homestead at Logan's Point, the very spot where George Logan had hoped to build a home years before. When in 1815 Logan returned to attempt to find the spot that he had marked in 1801, the two men met. Logan bought the land and settled there permanently, while Harrison moved to Salem, Indiana. The next year he would be elected lieutenant governor. 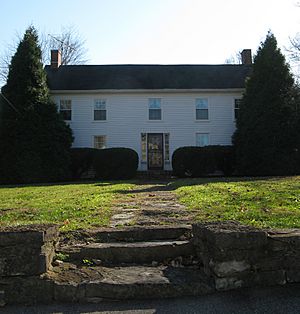 Although most of the fledgling town's population was Presbyterian, initially the nearest church was located in Charlestown, 25 miles to the west. In 1819, Presbyterian minister Thomas C. Searle (January 15, 1787 – October 15, 1821) moved to nearby Madison. While he served religious needs of Presbyterians in a wide area of land in southern Indiana, he quickly realized that a large portion of those he proselytized to was the Scotch-Irish Presbyterians from Dunn's Settlement. According to historian Frank Baker, "by 1820, there were 21,000 Baptists, 20,000 Methodists, but only 2,700 Presbyterians in Kentucky." While this statistic refers to Kentucky and not Indiana, it is nonetheless indicative of a similar situation across the river in Indiana. Therefore, while Dunn's Settlement was small, the concentration of Presbyterians living there was significant when considering the overall small number of Presbyterians in the area. On March 4, 1820, Searle founded the Hanover Presbyterian Church. His wife, a native of Hanover, New Hampshire, was greatly admired by the church's congregants; therefore, the church adopted the name it did. Before long, the town also adopted the name "Hanover," although officially it could only be named "South Hanover" because a post office was already in existence in Shelby County for a town of "Hanover." When the other town of Hanover ceased to support a post office, then South Hanover's name was shortened to Hanover.

Following the founding of the church, plans quickly were initiated for the construction of a church edifice. Williamson Dunn donated land and funding for the cause. However, in October 1821, Searle died, and the ministerial post at the Hanover Presbyterian Church remained unfilled until 1823. 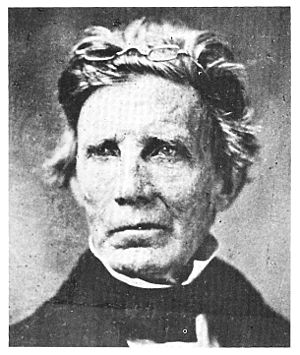 John Finley Crowe was born in Greene County, Tennessee and grew up in Tennessee and Missouri. He grew up in a Presbyterian household, although he was not religious. However, after meeting some Presbyterian elders who had moved from North Carolina to his area in Missouri, Crowe became interested in pursuing a religious education. He attended Transylvania College in Lexington, Kentucky, and then continued his education at Princeton Theological Seminary in Princeton, New Jersey. After completing his Masters of Divinity in 1815, Crowe accepted his first ministerial assignment in Shelbyville, Kentucky. While there, Crowe became actively involved in the abolitionist movement. He established a Sunday school for African-American children, although he could not find a location in the area that would permit such a school to meet. On May 7, 1822, he began publication of the Abolition Intelligence and Missionary Magazine. Crowe's abolitionist sympathies alienated him from his slave-holding neighbors, and it was not long before he lost access to the printing press. 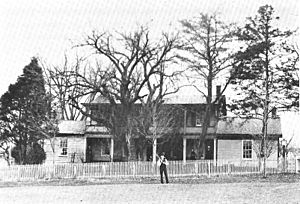 Residence of John Finley Crowe in Hanover, now listed on the National Register of Historic Places

On April 2, 1823, John M. Dickey, moderator of a church session that also seated Williamson Dunn and George Logan as elders, sent a letter to Crowe inviting him to serve at the Hanover Presbyterian Church. Sickened by the increasingly hostile attitude of his neighbors in Kentucky towards his abolitionist views, Crowe accepted the position, relieved to move to a state where the possession of slaves was illegal. Shortly after his arrival in Hanover, Crowe began construction of a residence, known today as the Crowe-Garritt House. Located just north of the present-day Hanover Presbyterian Church, the Crowe-Garritt House was added to the National Register of Historical Places in 1980.

Soon after his arrival at the Hanover Presbyterian Church, Crowe began petitioning church members to sponsor the founding of a seminary. While congregants were reluctant at first to take on the task, ultimately he prevailed, and a religious school opened in Hanover on January 1, 1827. Initially, classes met in the Presbyterian Church's old stone church building, which was located in the present-day area of the Hanover Firehouse. Within a year, however, the school had outgrown this location, and Williamson Dunn then donated land for the construction of a new college edifice. In 1829, the state of Indiana granted a charter for a Hanover Academy, while the Presbyterian Synod of Indiana recognized the theological segment of the school as the Indiana Seminary. While the Hanover Academy grew exponentially over the ensuing years, the seminary stagnated; the two entities split in 1836, and in 1841 the seminary moved to New Albany, Indiana. Ultimately, faced with money problems and a split amongst students on the issue of slavery, in 1859 the seminary once again moved, this time reopening as McCormick Theological Seminary in Chicago, Illinois. Meanwhile, the Hanover Academy in 1833 received a charter from the state of Indiana to form a college by the name of Hanover College. 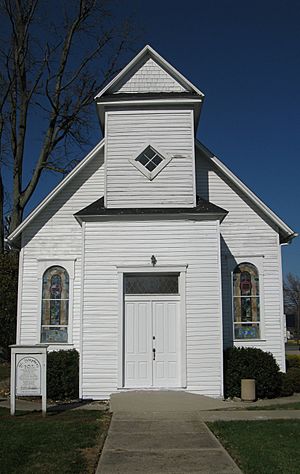 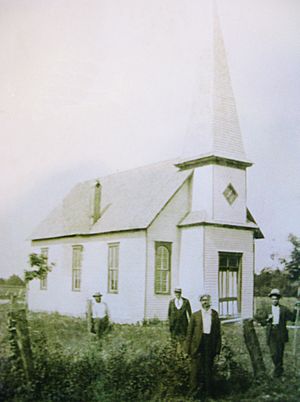 Although the Hanover was largely founded by Presbyterians, people of other religious persuasions soon began moving into the area. In the United States west of the Appalachian Mountains as a whole, Baptists and Methodists largely outnumbered Presbyterians during the early nineteenth century. Therefore, it became inevitable that competing churches would spring up in Hanover. The Hanover United Methodist Church was founded in 1846; the Hanover Baptist Church soon followed. The First Christian Church (Disciples of Christ) was founded in 1974.

St. Stephen's African Methodist Episcopal Church was listed on the National Register of Historic Places in 2000.

The climate in this area is characterized by hot, humid summers and generally mild to cool winters. According to the Köppen Climate Classification system, Hanover has a humid subtropical climate, abbreviated "Cfa" on climate maps. 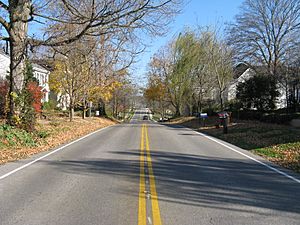 View of Main Street in Hanover.

There were 1,075 households of which 33.5% had children under the age of 18 living with them, 44.0% were married couples living together, 14.5% had a female householder with no husband present, 5.3% had a male householder with no wife present, and 36.2% were non-families. 29.4% of all households were made up of individuals and 12.1% had someone living alone who was 65 years of age or older. The average household size was 2.43 and the average family size was 2.96.

There were 1,068 households out of which 37.5% had children under the age of 18 living with them, 50.8% were married couples living together, 16.0% had a female householder with no husband present, and 28.8% were non-families. 24.4% of all households were made up of individuals and 8.6% had someone living alone who was 65 years of age or older. The average household size was 2.54 and the average family size was 2.99.

Fictional bartender at Cheers, Woody Boyd, was born and raised in Hanover according to the show. Although Woody Harrelson – the actor who portrayed the character – was born in Midland, Texas and grew up in Lebanon, Ohio with his two brothers, he did graduate in 1983 from Hanover College as an English major with a minor in Theatre. He recently was honored by the college and given an Honorary Doctoral Degree for his career.

All content from Kiddle encyclopedia articles (including the article images and facts) can be freely used under Attribution-ShareAlike license, unless stated otherwise. Cite this article:
Hanover, Indiana Facts for Kids. Kiddle Encyclopedia.