Salem is a city in and the county seat of Washington Township, Washington County, in the U.S. state of Indiana. The population was 6,319 at the 2010 census.

Salem was laid out and platted in 1814. It was named for Salem, North Carolina, the hometown of one of the city founders.

The Salem post office has been in operation since 1816.

In June 1863, the Confederate cavalry under John Hunt Morgan had departed Tennessee on what would later become known as Morgan's Raid. Traveling through Tennessee and into Kentucky, Morgan eventually crossed into Indiana; he reached Salem on July 10, 1863, coming north from Corydon. Upon entering Salem at approximately 9 a.m., Morgan immediately took possession of the town and placed guards over the stores and streets. The cavalrymen burned the large, brick railroad depot, along with all the train cars on the track and the railroad bridges on each side of the town. Morgan demanded taxes from the two flour mills that belonged to DePauw and Knight, and from the Allen Wollen Mill. Morgan's men looted stores and took about $500 from the area before departing about 3 p.m.

"They did not pillage with any sort of method or reason; it seemed to be a mania, senseless and purposeless. One man carried for two days a bird cage containing three canaries. Another rode with a huge chafing dish on the pommel of his saddle. Although the weather was intensely warm, another slung seven pairs of skates around his neck. I saw very few articles of real value taken; they pillaged like boys robbing an orchard."

Salem is primarily an agricultural community, surrounded by typical Indiana forests and farmland and small bodies of water. The primary crops grown in the area are corn and soybeans. Homes in the area are of a variety of styles, with a portion of residential homes having Victorian architectural design.

The climate in this area is characterized by hot, humid summers and generally mild to cool winters. According to the Köppen Climate Classification system, Salem has a humid subtropical climate, abbreviated "Cfa" on climate maps.

Every September, Salem celebrates "Old Settler's Day" at the John Hay Center. Set in a village of authentic log structures, the festival features historical re-enactments, as well as local arts and crafts. Along with "Old Settler's Day", Salem also celebrates Friday Night on the Square in September. The town square is barricaded from cars and the people of Salem meet to enjoy the festivities which include food booths, commercial booths and sometimes even scavenger hunts.

The downtown area is on the National Register of Historic Places, as are several local buildings.

The Carnegie Library in Salem was one of nearly 2,000 libraries built in the United States including 164 in Indiana in the early 20th century with funds donated by steel conglomerate Andrew Carnegie. Salem received the grant in February 1904, broke ground in August 1904 and opened in July 1905. Still in use today, the Carnegie Library in Salem is one of just one hundred in the state of Indiana still being used for its original purpose.

Located in the center of Salem's town square, the Washington County Courthouse is generally known as Salem's most famous and recognizable landmark. The courthouse has historical place markers surrounding it, and at the southeastern corner of the grounds, there is a memorial to veterans killed in action during conflicts dating back to the Revolutionary War.

The birthplace of John Hay has been a National Historic Site since 1971 and is located in Salem. The building was originally used as a school house and was built in 1824. It has been restored and furnished in the 1840 period. 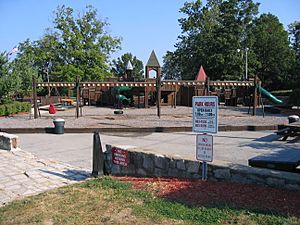 Unusual for a town of this size is a large children's playground, "Riley's Place" at DePauw Park. Named after Riley Jean Tomlinson, a local toddler who accidentally drowned in a swimming pool, the park was built in 2001 and contains two- and three- story wooden castles and other structures for children's play (along with swings, slides, and similar playground equipment).

On July 5, 1988, 13 homemade bombs placed inside brown grocery bags were discovered near bridges and buildings around the town containing sticks of dynamite. However, due to faulty blasting caps, none of the bombs exploded. Had the explosives gone off, it would have severed the town from outside aid.

Two men, John M. Hubbard and Jerry A. Conrad were convicted on all counts in September and October 1989. Prosecutors allege that Mr. Hubbard had a long-standing rivalry with Democratic State Representative Frank Newkirk Jr..

Salem is also home to Salem Speedway. It is a half mile high banked paved oval that was first built in 1947. Many of the most legendary drivers of the past 50 years have raced there including Ted Horn, Parnelli Jones, AJ Foyt, Bobby and Al Unser, Mario Andretti, Larry Dickson, Darrell Waltrip and Jeff Gordon. AJ Foyt at one time held the world record for a half mile oval at the speedway. One of ESPN's first televised auto racing events was held there in 1979.

See also: List of people from the Louisville metropolitan area

All content from Kiddle encyclopedia articles (including the article images and facts) can be freely used under Attribution-ShareAlike license, unless stated otherwise. Cite this article:
Salem, Indiana Facts for Kids. Kiddle Encyclopedia.