Salem Speedway is a .555 miles (0.893 km) long paved oval motor racetrack in Washington Township, Washington County, near Salem, Indiana, approximately 100 miles (160 km) south of Indianapolis. The track has 33° degrees of banking in the corners. Major auto racing series that run at Salem are ARCA and USAC.

It opened in 1947; two drivers were killed on the first lap of the first race. The track received major storm damage in 1981 and it was not used until 1987. A thunderstorm had ripped the roof off the grandstands and fences were damaged. Don Gettelfinger Sr. bought the track in 1987 and he replaced the fence with concrete. The track closed in May 1995 when he declared bankruptcy. Owen and Beverly Thompson bought the track and reopened it in 1996 after adding a new building, redoing the grandstand seating to a new capacity of 6000 people, and renovating the pits. Thompson leased the track to Bill Kniesly starting in 2020.

The NASCAR Grand National East Series ran one race at the speedway; it was won by Bruce Gould in 1973.

The ASA National Tour ran six races at the track, from 1998 through 2003 and the winners were Scott Hansen (twice), David Stremme, Tim Sauter, Gary St. Amant and Robbie Pyle.

NASCAR Southeast Series ran two races at the facility between 1996 and 1997; the races were won by Steven Christian and Ron Young respectively. 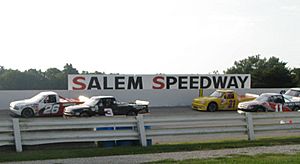 On July 21, 1990, during the Joe James / Pat O'Connor Memorial sprint car event at the Salem Speedway, which was nationally broadcast on ESPN Thunder, sprint car driver Rich Vogler sustained severe head injuries and was killed after a crash in turn 4. Vogler, who was leading the event at the time and was about to take the white flag signaling one lap to go, hit head on with the turn 4 wall, violently throwing tires, Vogler's helmet, and other pieces of Vogler's car all over the track. The race was red flagged and would never restart. Vogler, now dead at the age of 39, was declared the winner posthumously because of USAC National Sprint Car Series rules on a red flag reverting to the previous completed lap. This was his 170th win. Finishing first among the survivors was a young driver from Pittsboro, Indiana, named Jeff Gordon.

All content from Kiddle encyclopedia articles (including the article images and facts) can be freely used under Attribution-ShareAlike license, unless stated otherwise. Cite this article:
Salem Speedway Facts for Kids. Kiddle Encyclopedia.