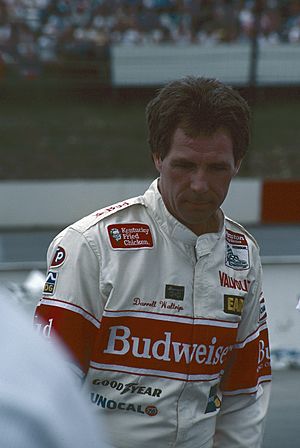 Darrell Lee Waltrip (born February 5, 1947) is a retired American racecar driver. Waltrip won three Monster Energy NASCAR Cup Series championships and 84 races, including the 1989 Daytona 500. He is now part of the broadcast team for Fox Sports. Waltrip’s younger brother, Michael Waltrip, owned and raced for his own team in NASCAR. In June of 2011 Waltrip was given a spot in the NASCAR Hall of Fame. He is a part of the Hall of Fame class of 2012.

All content from Kiddle encyclopedia articles (including the article images and facts) can be freely used under Attribution-ShareAlike license, unless stated otherwise. Cite this article:
Darrell Waltrip Facts for Kids. Kiddle Encyclopedia.