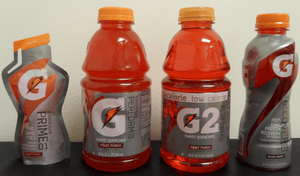 Gatorade is a brand of sports-themed food and beverage products, built around its signature product: a line of sports drinks. Gatorade is currently manufactured by PepsiCo, distributed in over 80 countries. The beverage was first developed in 1965 by researchers at the University of Florida, to replenish the combination of water, carbohydrates, and electrolytes that the school's student-athletes lost (in sweat) during rigorous athletic competitions. Its name was derived from the collective nickname of the university's athletic teams, "the Gators".

Originally produced and marketed by Stokely-Van Camp, the Gatorade brand was purchased by the Quaker Oats Company in 1983, who was bought out by PepsiCo in 2001. As of 2010, Gatorade is PepsiCo’s 4th-largest brand, on the basis of worldwide annual retail sales. It primarily competes with Coca-Cola's Powerade and Vitaminwater brands worldwide; plus, Lucozade Sport in the United Kingdom. Within the United States, Gatorade accounts for approximately 75 percent market share in the sports drink category.

There are many other flavours of Gatorade, including: 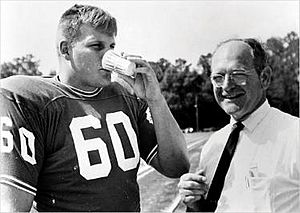 University of Florida football player Chip Hinton testing Gatorade in 1965, pictured next to the leader of its team of inventors, Robert Cade.

Gatorade has been the subject of substantial media attention and reference in popular culture situations, most of which are in relation to team or individual athletic sports. The most notable and ongoing presence of Gatorade in popular culture is the Gatorade shower, originally called the "Gatorade Dunk," where players from a victorious team pick up the Gatorade cooler, sneak up behind the head coach, and pour the contents of the cooler (generally Gatorade and ice) over his head at the end of an American football game. This tradition was popularized in the mid-1980s when Harry Carson and Jim Burt, of the New York Giants, doused head coach Bill Parcells during the 1985 season. Burt's teammates picked up on this practice and popularized it during the team's championship season of 1986-87. The tradition has since become a recurring tradition across other team sports.

Gatorade has also achieved status as the cliché representative for sports drinks in American media, for example, in the film Clerks, the character Dante is at one point forced to give free Gatorade to his hockey teammates, and in the film The Waterboy, Adam Sandler is told that "the water sucks" and that Gatorade is superior.

All content from Kiddle encyclopedia articles (including the article images and facts) can be freely used under Attribution-ShareAlike license, unless stated otherwise. Cite this article:
Gatorade Facts for Kids. Kiddle Encyclopedia.