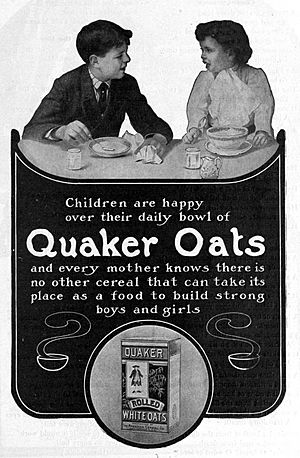 Quaker Oats was founded in 1901 as the four oat mills merged:

In 1969 Quaker got Fisher-Price, a toy business. Fisher-Price stopped being owned by Quaker in 1991.

In August 2001, Quaker was bought out by Pepsico because Pepsi wanted to own Gatorade and be in the sports beverage market.

Since the late 1980s, actor Wilford Brimley has appeared in television commercials.

The brands in the United States:

The brands in the United Kingdom:

All content from Kiddle encyclopedia articles (including the article images and facts) can be freely used under Attribution-ShareAlike license, unless stated otherwise. Cite this article:
Quaker Oats Company Facts for Kids. Kiddle Encyclopedia.