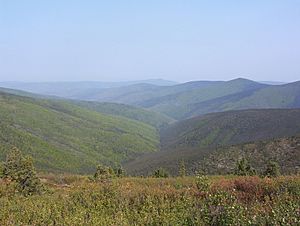 The Klondike is a region of the Yukon territory in northwest Canada, east of the Alaskan border. It lies around the Klondike River, a small river that enters the Yukon River from the east at Dawson City.

The Klondike is famed due to the Klondike Gold Rush, which started in 1897 and lasted until 1899. Gold has been mined continuously in that area except for a break in the late 1960s and early 1970s.

The name "Klondike" evolved from the Hän word Tr'ondëk, which means "hammerstone water". Early gold seekers found it difficult to pronounce the First Nations word, so "Klondike" was the result of this poor pronunciation.

The climate is warm in the short summer, and very cold during the long winter. By late October ice is formed over the rivers. The ground for the majority of the year is frozen to the depth of 1 to 3 metres (3 to 10 ft).

All content from Kiddle encyclopedia articles (including the article images and facts) can be freely used under Attribution-ShareAlike license, unless stated otherwise. Cite this article:
Klondike, Yukon Facts for Kids. Kiddle Encyclopedia.