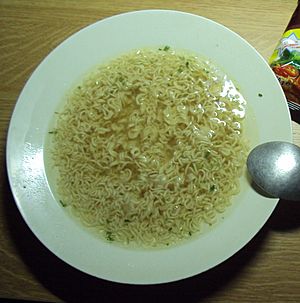 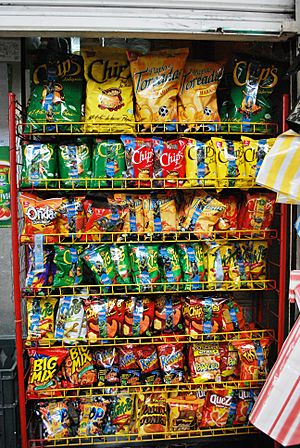 A rack of convenience snack foods, including chips and pretzels

Convenience food, or tertiary processed food, is food that is commercially prepared (often through processing) to optimise ease of consumption. Such food is usually ready to eat without further preparation. It may also be easily portable, have a long shelf life, or offer a combination of such convenient traits. Although restaurant meals meet this definition, the term is seldom applied to them. Convenience foods include ready-to-eat dry products, frozen foods such as TV dinners, shelf-stable foods, prepared mixes such as cake mix, and snack foods.

Bread, cheese, salted food and other prepared foods have been sold for thousands of years. Other kinds were developed with improvements in food technology. Types of convenience foods can vary by country and geographic region. Some convenience foods have received criticism due to concerns about nutritional content and how their packaging may increase solid waste in landfills. Various methods are used to reduce the unhealthy aspects of commercially produced food and fight childhood obesity.

Convenience food is commercially prepared for ease of consumption. Products designated as convenience food are often sold as hot, ready-to-eat dishes; as room-temperature, shelf-stable products; or as refrigerated or frozen food products that require minimal preparation (typically just heating) Convenience foods have also been described as foods that have been created to "make them more appealing to the consumer." Convenience foods and restaurants are similar in that they save time. They differ in that restaurant food is ready to eat, whilst convenience food usually requires rudimentary preparation. Both typically cost more money and less time compared to home cooking from scratch.

Throughout history, people have bought food from bakeries, creameries, butcher shops and other commercial processors to save time and effort. The Aztec people of Central Mexico utilized several convenience foods that required only adding water for preparation, which were used by travelers. Cornmeal that was ground and dried, referred to as pinolli, was used by travelers as a convenience food in this manner.

Canned food was developed in the 19th century, primarily for military use, and became more popular during World War I. The expansion of canning depended significantly upon the development of a machine for producing large quantities of cans very cheaply. Before the 1850s, making a can for food required a skilled tinsmith; afterwards, an unskilled laborer, operating a can-making machine, could produce 15 times as many cans each day.

One of the earliest industrial-scale processed foods was meatpacking. After the invention of a system of refrigerator cars in 1878, meat could be raised, slaughtered, and butchered hundreds (later thousands) of miles or kilometers away from the consumer.

Experience in World War II contributed to the development of frozen foods and the frozen food industry. Modern convenience food saw its beginnings in the United States during the period that began after World War II. Many of these products had their origins in military-developed foods designed for storage longevity and ease of preparation in the battle field. Following the war, several commercial food companies had leftover manufacturing facilities, and some of these companies created new freeze-dried and canned foods for home use. Like many product introductions, not all were successful—convenience food staples such as fish sticks and canned peaches were counterbalanced by failures such as ham sticks and cheeseburgers-in-a-can.

As of the 2010s due to increased preference for fresh, "natural", whole, and organic food and health concerns the acceptability of processed food to consumers in the United States was dropping and the reputation of major packaged food brands had been damaged. Firms responded by offering "healthier" formulations and acquisition of brands with better reputations.

These products are often sold in portion-controlled, single-serving packaging designed for portability.

Many people criticise these products, because: 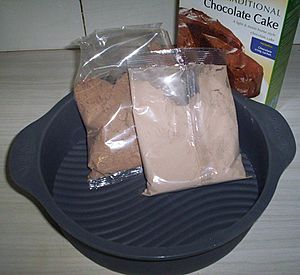 Gristmills have produced flour for baking for thousands of years. In more recent times flour has been sold with other ingredients mixed in, as have other products ready to cook. Packaged mixes are convenience foods which typically require some preparation and cooking either in the oven or on the stove top.

Examples include cake mixes, macaroni and cheese, brownie mixes, and gravy mixes. Some packaged mixes may have a high saturated fat content. 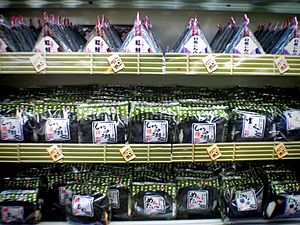 Onigiri at a convenience store in Kamakura, Japan

In 2007 it was noted in the book Australia's food & nutrition 2012 that a distinct increase in convenience food consumption had been occurring in Australia.

In Japan, onigiri (rice balls) are a popular convenience food that dates for millennia — by the Heian period these were established enough to be mentioned in literature. Additional Japanese convenience foods include prepared tofu (bean curd), prepared packages of seafood and instant ramen noodles.

Canned tuna packed in oil is a convenience food in the Solomon Islands.

In Russia, frozen pelmeni, a type of meat dumplings, adopted from the Finno-Ugric Uralian peoples such as Komi, Mansi and Udmurts, are known from at least the 18th century, and industrially produced and prepacked pelmeni are a staple of the supermarket freezer sections.

In some instances, retail sales of convenience foods may provide higher profit margins for food retailers compared to the profits attained from sales of the individual ingredients that are present in the convenience foods.

A survey in 1984 attributed over one-third of funds spent by consumers for food in Great Britain to be for convenience food purchases.

Several groups have cited the environmental harm of single serve packaging due to the increased usage of plastics that contributes to solid waste in landfills. Due to concerns about obesity and other health problems, some health organizations have criticized the high fat, sugar, salt, food preservatives and food additives that are present in some convenience foods. 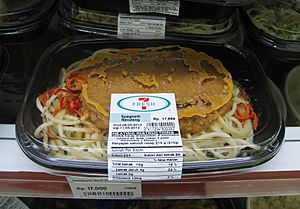 Frozen dinner, to be heated in microwave oven

In most developed countries, 80% of consumed salt comes from industry-prepared food (5% come from natural salt; 15% comes from salt added during cooking or eating). Health effects of salt concentrate on sodium and depend in part on how much is consumed. A single serving of many convenience foods contains a significant portion of the recommended daily allowance of sodium. Manufacturers are concerned that if the taste of their product is not optimized with salt, it will not sell as well as competing products. Tests have shown that some popular packaged foods depend on significant amounts of salt for their palatability.

In response to the issues surrounding the healthfulness of convenience and restaurant foods, an initiative in the United States, spearheaded by first lady Michelle Obama and her Let's Move! campaign, to reduce the unhealthy aspects of commercially produced food and fight childhood obesity, was unveiled by the White House in February 2010. Mrs. Obama has pushed the industry to cut back on sugars and salts found in many convenience foods, encouraging self-regulation over government intervention through laws and regulations. Despite Mrs. Obama's stated preference on self-regulation, the Food and Drug Administration announced that it was looking into quantifying the guidelines into law while other groups and municipalities are seeking to add other preventative measures such as target taxes and levies onto these products.

In response to the attention, in April 2010 a coalition of sixteen manufactures all agreed to reduce salt levels in foods sold in the United States under a program based on a similar effort in the United Kingdom. However, the initiative has met with resistance from some manufacturers, who claim that processed foods require the current high levels of salt to remain appetizing and to mask undesirable effects of food processing such as "warmed-over flavor". The coalition expanded its mission in May 2010 by announcing that it intends to reduce the amount of calories in foods. By introducing lower calorie foods, changing product recipes and reducing portion sizes, the coalition stated that it expected to reduce the caloric content of foods by more than 1.5 trillion calories in total by 2012.

All content from Kiddle encyclopedia articles (including the article images and facts) can be freely used under Attribution-ShareAlike license, unless stated otherwise. Cite this article:
Convenience food Facts for Kids. Kiddle Encyclopedia.