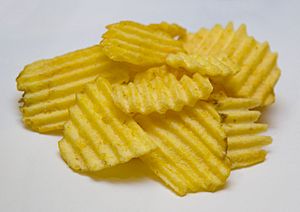 Potato chips (also called crisps in the United Kingdom and Ireland) are thinly cut potatoes that have been baked or fried and lightly salted or seasoned. Some popular flavours of potato chips are: salt and vinegar, ketchup, sour cream and onion. They are one of the most important snack foods in Western nations. In England, they are called "Crisps", In America, they are called "Potato chips".

In the 1790s, Thomas Jefferson introduced thick french fries to the United States from France. However, a picky customer at a restaurant at the Moon Lake Lodge in Saratoga Springs, New York, was making the chef, George Crum, angry by continually complaining that the fries were not thin enough. Finally, George Crum became so impatient he decided to exaggerate. He sliced the potatoes so thinly they could not even be pierced with a fork. Then he soaked them in ice water for 30 minutes. After he fried and salted them, he gave them to the customer - who, to his surprise, loved them. First named "Saratoga chips" in 1835, it later became well known as "potato chips". George Crum later opened his own restaurant that served his special potato chips.

In the 20th century, potato chips spread beyond chef-cooked restaurant fare and began to be mass-produced for home consumption. The Dayton, Ohio-based Mike-sell's Potato Chip Company, founded in 1910, identifies as the "oldest potato chip company in the United States".

An advertisement for Smith's Potato Crisps

In an idea originated by the Smiths Potato Crisps Company Ltd, formed in 1920, Frank Smith packaged a twist of salt with his chips in greaseproof paper bags, which were sold around London.

The first flavored chips in the United States, barbecue flavor, were being manufactured and sold by 1954. In 1958, Herr's was the first company to introduce barbecue-flavored potato chips in Pennsylvania.

Chips sold in markets were usually sold in tins or scooped out of storefront glass bins and delivered by horse and wagon. Early potato chip bags were wax paper with the ends ironed or stapled together. At first, potato chips were packaged in barrels or tins, which left chips at the bottom stale and crumbled.

In the 1920s, Laura Scudder, an entrepreneur in Monterey Park, California, started having her workers take home sheets of wax paper to iron into the form of bags, which were filled with chips at her factory the next day. This pioneering method reduced crumbling and kept the chips fresh and crisp longer. This innovation, along with the invention of cellophane, allowed potato chips to become a mass-market product. Today, chips are packaged in plastic bags, with nitrogen gas blown in prior to sealing to lengthen shelf life, and provide protection against crushing. 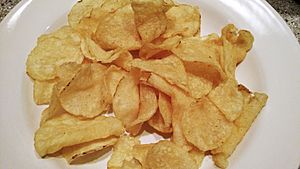 Chips were long made in a batch process, where the potato slices are rinsed with cold water to release starch, fried at a low temperature (300 °F (150 °C)), and continuously raked to prevent them from sticking together.

Industrial advances resulted in a shift to production by a continuous process, running chips through a vat of hot oil and drying them in a conveyor process.

Some small producers continued to use a batch process, notably in Maui. In 1980, inspired by the Maui Chip, an entrepreneur started Cape Cod Potato Chips to produce thicker, batch-cooked "Hawaiian style" potato chips, which came to be known as kettle-style (US) or hand-cooked (UK) chips and became a premium, "gourmet" item. Kettle chips are thicker and the surface starch is not rinsed off, resulting in a style of chip called "hard bite".

All content from Kiddle encyclopedia articles (including the article images and facts) can be freely used under Attribution-ShareAlike license, unless stated otherwise. Cite this article:
Potato chip Facts for Kids. Kiddle Encyclopedia.