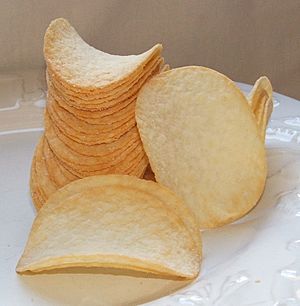 Pringles is an American brand of stackable potato chips. It was first made by Procter & Gamble in 1967. The brand was sold to Kellogg's in 2012. As of 2011, Pringles are sold in more than 140 countries.

Pringles are known for their packaging, which is made up of of a cardboard tube with a plastic lid on top. It is also known for the logo, which has a drawing of man with a large mustache.

All content from Kiddle encyclopedia articles (including the article images and facts) can be freely used under Attribution-ShareAlike license, unless stated otherwise. Cite this article:
Pringles Facts for Kids. Kiddle Encyclopedia.