Cheetos (formerly styled as Chee-tos until 1998) is a brand of cheese-flavored, puffed cornmeal snacks made by Frito-Lay, a subsidiary of PepsiCo. Fritos creator Charles Elmer Doolin invented Cheetos in 1948, and began national distribution in the U.S. The initial success of Cheetos was a contributing factor to the merger between The Frito Company and H.W. Lay & Company in 1961 to form Frito-Lay. In 1965 Frito-Lay became a subsidiary of The Pepsi-Cola Company, forming PepsiCo, the current owner of the Cheetos brand.

In 2010, Cheetos was ranked as the top selling brand of cheese puffs in its primary market of the United States; worldwide the annual retail sales totaled approximately $4 billion. The original Crunchy Cheetos are still in production but the product line has since expanded to include 21 different types of Cheetos in North America alone. As Cheetos are sold in more than 36 countries, the flavor and composition is often varied to match regional taste and cultural preferences—such as Savory American Cream in China, and Strawberry Cheetos in Japan. 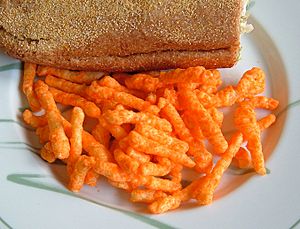 While Cheetos was the first snack food of its kind, competing products in the snack food category have since emerged—including Utz Cheese Curls, Herr's Cheese Curls and Wise Cheez Doodles. Most of the competing cheese-flavored snacks are distributed in specific regions of the U.S., and as of 2010 Cheetos remains as the top-selling cheese puff in America.

Cheetos are manufactured by blending corn and water. The mixture is heated under pressure, and then extruded through a die. The texture of the snack is formed as a result of contact with hot air, causing steam in the mixture to expand and creating its characteristic texture. After oven-drying or frying, the product is then tumbled with the desired flavor components (the original Crunchy Cheetos are fried). The process takes approximately 19 minutes and each half hour an in-house lab team inspects and taste-tests each batch.

The first Cheetos mascot was the Cheetos Mouse, which debuted in 1971 using the slogans "The cheese that goes crunch!" and "Hail Chee-sar!". The character was phased out around 1979.

The Cheetos brand is commonly recognized by association with its second and current mascot, an anthropomorphic sly, smooth-voiced cartoon cheetah named Chester Cheetah. Chester first appeared in television commercials in 1986, known for concluding Cheetos advertisements with slogans, which have evolved over time. He used both "The cheese that goes crunch!" and "It ain't easy bein' cheesy" as slogans from 1986 to 1997, and then "Dangerously cheesy" from 1997 onwards. In 2003, Chester was first rendered as a computer-generated character in the United State, while continuing to appear in a traditionally-animated form in some other countries where the brand is sold.

Cheetos have been the subject of public and media attention on multiple occasions due to the unpredictable shapes that form during the manufacturing process. Cheetos have been found in shapes which resembled the appearance of popular or historical figures. A single Cheeto described as being in the shape of Michael Jackson doing the Moonwalk Dance sold for $35.18 on eBay in the summer of 2009 at the time of Jackson's death, attracting national media coverage in the U.S. A couple who found a Cheetos snack in a shape they described as resembling Jesus Christ nicknamed it "Cheesus" and garnered media attention as a result of their consideration of selling on eBay. In 2016-7, "Cheeto Jesus" and variations thereon became a common nickname for Donald Trump.

All content from Kiddle encyclopedia articles (including the article images and facts) can be freely used under Attribution-ShareAlike license, unless stated otherwise. Cite this article:
Cheetos Facts for Kids. Kiddle Encyclopedia.