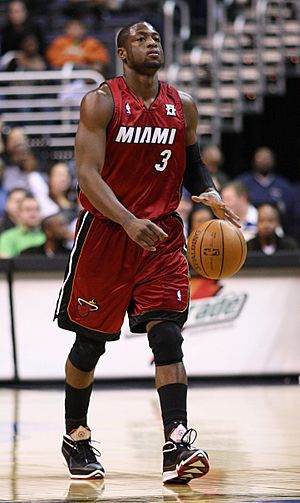 Dwyane Wade with the Miami Heat

Dwyane Tyrone Wade Jr. (born January 17, 1982) is an American basketball player. He was born in Chicago, Illinois. His parents divorced a short time after he was born. He attended college at Marquette University on a scholarship. He was on scholarship for basketball but he did not play his first year because of academic problems. The next year he started on Marquette and led them to a good season. The year after that he led the Marquette Golden Eagles to the Final Four in the NCAA tournament.

Wade went on to the NBA and was selected as the 5th pick overall in the NBA draft by the Miami Heat. He had a good rookie season in the NBA, averaging 15 points per game and 6 assists per game. He soon became a superstar and led the Heat to an NBA championship in 2006. Wade was named the Most Valuable Player (MVP) of the 2006 NBA Finals, in which the Heat beat the Dallas Mavericks.

All content from Kiddle encyclopedia articles (including the article images and facts) can be freely used under Attribution-ShareAlike license, unless stated otherwise. Cite this article:
Dwyane Wade Facts for Kids. Kiddle Encyclopedia.