The Chicago Theatre is a theatre in Chicago, Illinois where stage plays, magic shows, comedy, speeches, and popular music concerts are held every year. The building was added to the National Register of Historic Places on June 6, 1979, and it was listed as a Chicago Landmark on January 28, 1983. The theatre is also known for the bright color lights that light-up the words Chicago side to side. 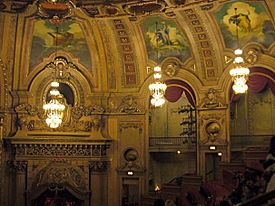 The structure is seven stories tall and fills nearly one half of a city block. The 60-foot (18 m) wide by six-story tall triumphal arch motif of the State Street façade has been journalistically compared to the l'Arc de Triomphe in Paris. The central arch-headed window adapts the familiar motif of Borromini's false-perspective window reveals of the top floor of Palazzo Barberini, Rome. The coat of arms of the Balaban and Katz chain—two horses holding ribbons of 35 mm film in their mouths outlined by a border of film reels—is set inside a circular Tiffany stained glass window inside the arch. The exterior of the building is covered in off-white architectural terracotta supplied by the Northwestern Terra Cotta Company with Neo-Baroque stucco designs by the McNulty Brothers. 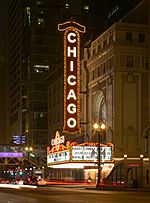 The interior shows French Baroque influence from the Second French Empire. The grand lobby, five stories high and surrounded by gallery promenades at the mezzanine and balcony levels, is influence by the Royal Chapel at Versailles. The grand staircase is patterned from the grand stair of the Paris Opera House and ascends to the various balcony levels. Marshall Field and Company supplied interior decorations including drapes and furniture. The crystal chandeliers and bronze light fixtures fitted with Steuben glass shades were designed and built by Victor Pearlman and Co.

The theatre is also known for its grand Wurlitzer pipe organ. At the time it was installed it was known as “The Mighty Wurlitzer” and could imitate the instruments of an orchestra. Jesse Crawford, a noted Theatre Organ performer, is attributed as the person who "was responsible for the design and choice of sounds". The organ came from Wurlitzer's North Tonawanda Barrel Organ Factory in July 1921 with "four manuals and 26 ranks of pipes-Opus 434". The American Theatre Organ Society restored the organ in 1970, which had expanded the organ from 26 to 29 ranks by that time. It is one of the oldest Mighty Wurlitzers still in existence.

All content from Kiddle encyclopedia articles (including the article images and facts) can be freely used under Attribution-ShareAlike license, unless stated otherwise. Cite this article:
Chicago Theatre Facts for Kids. Kiddle Encyclopedia.