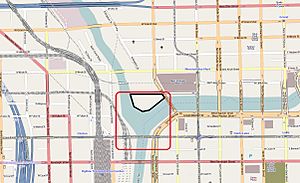 Map depicting Wolf Point (area owned by the Kennedy family in black, with approximate area of the historical Wolf Point settlement in red)

Wolf Point is the location where the North, South and Main Branches of the Chicago River meet in the present day Near North Side, Loop, and Near West Side community areas of Chicago.

Wolf Point is historically important in the development of early Chicago. This was the location of Chicago's first three taverns, its first hotel, Sauganash Hotel, its first ferry, its first drug store, its first church, and the first bridges across the Chicago River.

The Wolf Point is said to be named after a Native American Chief whose name meant to wolf in English, but other theories exist.

All content from Kiddle encyclopedia articles (including the article images and facts) can be freely used under Attribution-ShareAlike license, unless stated otherwise. Cite this article:
Wolf Point, Chicago Facts for Kids. Kiddle Encyclopedia.