Kids Encyclopedia Facts
For the historical proposed state in Eastern Tennessee, see State of Franklin.
Not to be confused with Franklin County, Tennessee.

Franklin is a city and county seat of Williamson County, Tennessee, United States. About 21 miles (34 km) south of Nashville, it is one of the principal cities of the Nashville metropolitan area and Middle Tennessee. As of 2020, its population was 83,454. It is the seventh-largest city in Tennessee.

The city developed on both sides of the Harpeth River, a tributary of the Cumberland River. In the 19th century, Franklin (as the county seat) was the trading and judicial center for primarily rural Williamson County and remained so well into the 20th century as the county remained rural and agricultural in nature.

Since 1980, areas of northern Franklin have been developed for residential and related businesses, in addition to modern service industries. The population has increased rapidly as growth moved in all directions from the core. Despite recent growth and development, Franklin is noted for its many older buildings and neighborhoods, which are protected by city ordinances. 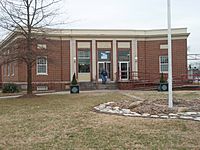 The city of Franklin was founded October 26, 1799, by Abram Maury, Jr. (1766–1825), a state senator who is buried with his family in Founders Pointe. Maury named the town after national founding father Benjamin Franklin, who was a close friend of Dr. Hugh Williamson, a member of the Continental Congress after whom Williamson County was named.

Ewen Cameron built the first European-American house in the town of Franklin. Cameron was born February 23, 1768, in Balgalkan, Ferintosh, Scotland. He emigrated to Virginia in 1785 and from there came to Tennessee. Cameron died February 28, 1846, having lived 48 years in the same log house. His second wife, Mary, and he are buried in the old City Cemetery. His descendants have lived in Franklin continuously since 1798, when his son Duncan was born.

During the American Civil War, the Battle of Franklin was fought in the city on November 30, 1864, resulting in almost 10,000 casualties (killed, wounded, captured, and missing). Forty-four buildings were converted to use as field hospitals. The Carter, Carnton, and the Lotz historic homes are still standing from this era.

Long a suburb to Nashville, Tennessee, Franklin has expanded more than fivefold since 1980, when its population was 12,407. In 2012, it had an estimated population of 68,280. This makes it rank as the seventh-largest city in the state. Many of its residents commute to businesses in Nashville, but considerable growth has occurred in Franklin and the county of a regional economy.

In the early morning hours of Christmas Eve of 1988, one person died when an F4 tornado struck the city.

"Wine Down Main Street" is a unique wine-tasting event attracting more than 2,000 attendees to historic Main Street in Franklin on the first Friday in November. This annual event is a benefit for the Boys & Girls Club of Middle Tennessee's Franklin and Fairview clubhouses.

Franklin's Pumpkinfest, an annual fundraiser for the Heritage Foundation of Franklin and Williamson County, is held each year on the Saturday before Halloween. Halloween-themed activities include music, children's amusements, local artisans, and food.

Dickens of a Christmas

Dickens of a Christmas is celebrated every second week in December, attracting approximately 50,000 visitors yearly. It takes place in Historic Downtown Franklin. More than 250 costumed volunteers masquerade as figures from Charles Dickens' A Christmas Carol. Music and dancing are a big part of the festival, and local school and church musical groups often perform. Victorian cuisine is served to visitors, and an arts and crafts bazaar features prominently in Public Square.

Franklin is an active participant in the Sister Cities program and has relationships with the following municipalities:

According to the City's 2020 Comprehensive Annual Financial Report, the top employers in the city are:

Electricity is provided by the Middle Tennessee Electric Membership Corporation (MTEMC), which serves several of the suburban counties of Nashville and purchases power from the Tennessee Valley Authority (TVA).

All content from Kiddle encyclopedia articles (including the article images and facts) can be freely used under Attribution-ShareAlike license, unless stated otherwise. Cite this article:
Franklin, Tennessee Facts for Kids. Kiddle Encyclopedia.