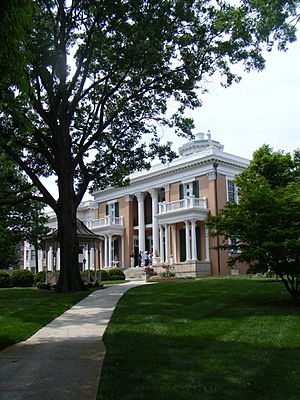 The Belmont Mansion which is on the campus.

The athletics teams of the university, called the Bruins, mostly play in the Ohio Valley Conference (OVC). The men's soccer team plays in the Horizon League because the OVC does not run a men's soccer league.

All content from Kiddle encyclopedia articles (including the article images and facts) can be freely used under Attribution-ShareAlike license, unless stated otherwise. Cite this article:
Belmont University Facts for Kids. Kiddle Encyclopedia.