Located on the former summer estate of Colonel Joseph and Adelicia Acklen, the tower was constructed circa 1850 to be used as a water tower for the Belmont Mansion and gardens. In 1864 during the Battle of Nashville union troops led by General T.J. Wood used the structure as a signal tower.

When a carillon of twenty-three bronze bells was installed at Ward-Belmont College in 1928, it became the first carillon in Tennessee and one of the first twenty-five carillons in North America. The original carillon bells were exchanged for an electronic carillon in 1951, shortly after the property became Belmont College.

In 1986, a second carillon of twenty-three bells was installed. A gift of nineteen more bells was given to Belmont University by The Massey Foundation and other beneficiaries and installed in November 2002 by Meeks, Watson and Company. The addition of a low D-sharp bell completed the carillon in 2005. The largest bell weighs 1,188 pounds, and the smallest bell weighs twenty-two pounds. The total combined weight of the forty-three bells amounts to 7,477 pounds. The bells were cast by royal bellfounders Petit and Fritsen, in Aarle-Rixtel, Netherlands and installed by the I.T. Verdin Company of Cincinnati, Ohio.

The Tower currently houses a total of forty-three bells and is one of only five carillons in the state of Tennessee. The present carillon is played by Dr. Richard Shadinger, Professor of Music in Belmont University's School of Music. 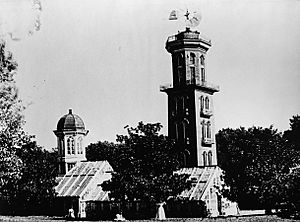 Design of the tower is credited to famed architect Adolphus Heiman with lesser mention of William Strickland. The tower design is based on the Lighthouse at Alexandria, one of the seven wonders of the ancient world, and it is the largest surviving antebellum water tower constructed for private use in the United States. The brick water tower stands 105 feet tall and was originally surrounded by a moat and bridge at the entrance.

Inside the five-story tower lies an original cast-iron staircase leading to the second floor of the tower. The staircase is an exact replica of the staircase in the Green-Meldrim House in Savannah, Georgia. The first floor of the tower was renovated into a prayer chapel in 1974, which is currently open to visitors day and night. The second floor houses the music library. The third floor holds a practice carillon. The fourth floor houses the keyboard control mechanism for the carillon bells.

The bronze bells are located behind screens on the fifth level of the tower.

History of the tower and carillon structure 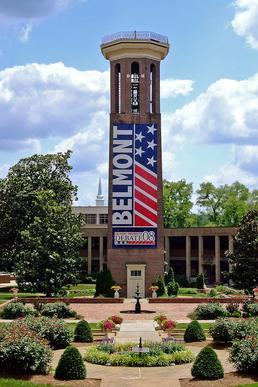 All content from Kiddle encyclopedia articles (including the article images and facts) can be freely used under Attribution-ShareAlike license, unless stated otherwise. Cite this article:
Belmont Tower and Carillon Facts for Kids. Kiddle Encyclopedia.