Belmont Mansion, also known as Acklen Hall, and originally known as Belle Monte, Belle Mont or Belmont, is a historic mansion located in Nashville, Tennessee on the campus of Belmont University that today functions as a museum.

In 1849, Adelicia Hayes Franklin married Joseph Alexander Smith Acklen, a young attorney from Alabama, and they immediately began construction of Belle Monte (Belmont) on 180 acres (73 ha) in Davidson County. It was completed by 1853 as an Italian villa style summer home. Adelicia and Joseph used Belmont as a summer home to escape from the heat of Adelicia's seven Louisiana cotton plantations, which totaled 8,600 acres (3,500 ha). The Acklens built, furnished, and landscaped one of the most elaborate antebellum homes in the South, totaling 36 rooms and 19,000 sq ft (1,800 m2). The estate contained a variety of buildings with the house adorning the top of the hill. Beside the house, there was a T-shaped guest house and art gallery. The south wing of the guest house contained guestrooms and a bowling alley. The art gallery had a corrugated glass roof and comprised the north wing. The grounds also included lavish gardens, conservatories, aviary, lake and a zoo. The conservatories housed tropical fruit and flowers along with camellia japonica, jasmine, lilies, and cacti. The zoo featured bears, monkeys, peacocks, singing birds, a white owl, alligators from Louisiana and a deer park. Covered balconies with cast iron railing and trim surrounded the house to protect windows from the sun. Atop the house, a ten-foot octagonal cupola vented the house during the summer months and provided an "astronomical observatory" used for viewing the stars, the estate and downtown Nashville. 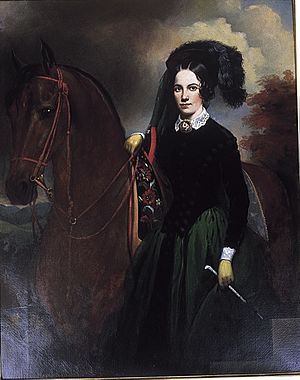 Adelicia with her horse Bucephalus.

Joseph and Adelicia had six children together, but their twins died of scarlet fever at the age of 2 in 1855. In 1863, Joseph died in Louisiana while watching over the plantations during the Civil War. Left alone, Adelicia secretly negotiated agreements with both Union and Confederate authorities to allow 2,800 bales of her cotton to be shipped to Liverpool, England, and sold for a total of $960,000.

Despite a two-week occupation by Union General Thomas J. Wood prior to the Battle of Nashville, Belmont Mansion and its contents went undamaged during the Civil War. Only the grounds, where thirteen thousand Union troops spent those first two weeks of December 1864, suffered damage.

Immediately following the war, Adelicia and her four children traveled to Europe. While there, she continued amassing her large art collection, including five major marble statues by America's most important sculptors working in Rome.These including works by Randolph Rogers, William Henry Rinehart, Joseph Mozier, and Chauncey Ives. Four of these pieces remain in the mansion today. Adelicia was also presented at the Court of Emperor Louis Napoleon and his wife Empress Eugénie.

Months before her death, Adelicia sold Belmont, and the surrounding land, to Lewis T. Baxter for around $54,000. In 1890, it opened as a women's academy and junior college. The school merged with Ward's Seminary in 1913 and was renamed Ward-Belmont. The Tennessee Baptist Convention purchased the school in 1951, and created a four-year, coeducational college. In 2007, Belmont University separated from the Tennessee Baptist Convention. Today the mansion is owned by the Belmont Mansion Association and Belmont University while it is operated and preserved by the Belmont Mansion Association.

Gilt frame mirrors hang over marble mantels reflecting the elaborate gasoliers and elegantly furnished parlors. Much of the original Venetian glass still adorns the windows, doors, and transoms of Belmont. The Grand Salon is considered by architectural historians to be the most elaborate domestic interior built in antebellum Tennessee. The gardens are now maintained as part of the University campus, including five cast iron gazebos. The 105-foot (32 m) water tower remains on the grounds and today serves as a Bell Tower for Belmont University.

The Belmont Mansion was listed on the National Register of Historic Places in 1971.

All content from Kiddle encyclopedia articles (including the article images and facts) can be freely used under Attribution-ShareAlike license, unless stated otherwise. Cite this article:
Belmont Mansion (Tennessee) Facts for Kids. Kiddle Encyclopedia.