Williamson County is a county in the U.S. state of Tennessee. As of the 2010 United States Census, the population was 205,226. The county seat is Franklin. The county is named after Hugh Williamson, a North Carolina politician who signed the U.S. Constitution.

The Tennessee General Assembly created Williamson County on October 26, 1799, from a portion of Davidson County. The county had originally been inhabited by at least five Native American cultures, including tribes of Cherokee, Chickasaw, Choctaw, Creek, and Shawnee. It is home to two Mississippian-period mound complexes, the Fewkes site and the Old Town site, built by a culture that preceded such tribes.

European-American settlers migrated into the area by 1798, preceded by traders. Most were from Virginia and North Carolina, part of a western movement after the Revolutionary War. In 1800, Abram Maury laid out Franklin, the county seat, which was carved out of part of a land grant he had purchased from Major Anthony Sharp. "The county was named in honor of Dr. Hugh Williamson of North Carolina, a colonel in the North Carolina militia and served three terms in the Continental Congress."

Many of the early inhabitants of the county were veterans who had been paid in land grants after the Revolutionary War. Those veterans who chose not to settle in the area often sold large sections of their land grants to speculators, who in turn subdivided the land and sold off smaller lots. Prior to the Civil War, the county was the second-wealthiest in the state, and part of the Middle Tennessee region. This area's resources of timber and rich soil (farmed for a diversity of crops including rye, corn, oats, tobacco, hemp, potatoes, wheat, peas, barley, and hay) provided a stable economy, as opposed to reliance on one cash crop.

The agricultural and rural nature of the county continued as the basis of its economy into the early 1900s. "Most residents were farmers who raised corn, wheat, cotton and livestock." One of the first major manufacturers to establish operations in the county was the Dortch Stove works, which opened a factory in Franklin. The factory later developed as the Magic Chef factory, producing electric and gas ranges. After falling into disuse, this factory complex was restored in the late 1990s. It is used for office space and considered a "model historic preservation adaptive reuse project."

Since the completion of the Interstate Highway System and the rapid expansion of Nashville, Tennessee since the mid-20th century, Williamson County has undergone tremendous growth, requiring investment in infrastructure and schools, and rapidly changing its character. Between 1990 and 2000, the county's population increased 56.3 percent, mostly in the northern part of the county, including Franklin. As of Census estimates in 2012, Franklin has more than 66,000 residents (a fivefold increase since 1980) and ranks as the eighth-largest city in the state. The southern part of the county remains primarily rural pastoral usage. Spring Hill is a growing city in this area. 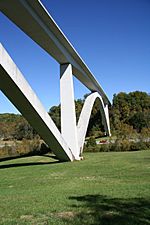 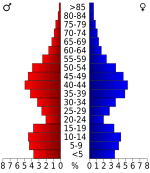 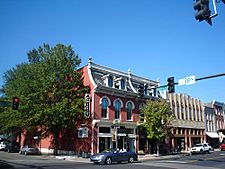 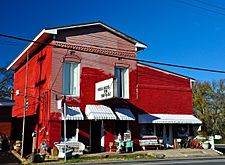 All content from Kiddle encyclopedia articles (including the article images and facts) can be freely used under Attribution-ShareAlike license, unless stated otherwise. Cite this article:
Williamson County, Tennessee Facts for Kids. Kiddle Encyclopedia.