Spring Hill is a city in Maury and Williamson counties, Tennessee, located approximately 30 miles (48 km) south of Nashville. Spring Hill's population as of 2020 was 50,005. Spring Hill is recognized as the 4th fastest growing city in Tennessee by the U.S. Census Bureau and is included in the Nashville metropolitan area.

The first settlers of Spring Hill arrived in 1808 and the city was established in 1809. Albert Russell was the first person to build a home on the land that became Spring Hill.

Spring Hill was the site of a Civil War battle, now known as the Battle of Spring Hill, on November 29, 1864.

Later, Spring Hill was the home of a preparatory school, Branham and Hughes Military Academy, the campus of which now serves as the main campus of Tennessee Children's Home, a ministry associated with the Churches of Christ. 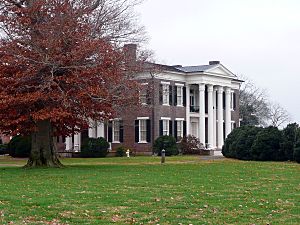 Rippavilla Plantation, which is located at 5700 Main Street (TN-31, Columbia Pike, or Nashville Hwy), offers educational activities and an annual corn maze among other attractions.

Spring Hill was the site of the Saturn Corporation production facility, which operated from 1990 to 2007. The Saturn S-Series, Saturn ION, and Saturn VUE were produced there. In 2007, General Motors Corporation (GM), the parent company of Saturn, shut down the facility to retool it for production of other GM vehicles and renamed it Spring Hill Manufacturing. The plant reopened in February 2008 and became the assembly point for the new Chevrolet Traverse. However, after a battle among plants in Spring Hill, Orion Township, Michigan and Janesville, Wisconsin, GM announced on June 26, 2009 that they had chosen to build a new small car in Orion Township. Nearly 2,500 Spring Hill auto workers were faced with lay-off, buy-out and early retirement. The vehicle assembly part of the Spring Hill plant was idled in late 2009 when production of the Traverse was moved to Lansing, Michigan, while production of power trains and metal stamping continued. In November 2011, GM announced plans for retooling of the vehicle assembly portion of the plant for use as an "ultra-flexible" plant which will initially be used to build the Chevy Equinox and GMC Terrain but will be designed for rapid retooling to other vehicles of similar size. In April of 2021 General Motors and South Korean joint-venture partner LG Energy Solution said they will build a second U.S. battery cell manufacturing plant, revealing plans for a $2.3 billion factory in Spring Hill, Tennessee.

Spring Hill has gone through rapid development and growth in recent years, causing General Motors to reopen their auto plant and begin hiring locally again, which will hire 1,000 new people. In addition, companies such as Ryder and Goodwill have announced new facilities in the Spring Hill area.

The city is served by both Maury County Public Schools and the Williamson County School District.

Interstate 65 passes through the eastern part of the city, but the only exit currently within city limits is State Route 396. An interchange on the north side of the city at an extended Buckner Road is scheduled to open in 2024. State Route 396, known locally as Saturn Parkway, provides an east-west freeway connection into the city with two exits before terminating at Beechcroft Road near the GM plant. U.S. Route 31 is the main north-south arterial through Spring Hill. It is alternatively called both Columbia Pike on the north side of town and Nashville Highway on the south side. State Route 247 is a major east-west road through the city.

All content from Kiddle encyclopedia articles (including the article images and facts) can be freely used under Attribution-ShareAlike license, unless stated otherwise. Cite this article:
Spring Hill, Tennessee Facts for Kids. Kiddle Encyclopedia.