Davidson County is a county located in the U.S. state of Tennessee. As of the 2010 census, the population was 626,681, making it the second-most populous county in Tennessee. Its county seat is Nashville, the state capital.

Davidson County has the largest population in the 13-county Nashville-Davidson–Murfreesboro–Franklin Metropolitan Statistical Area. Nashville has always been the region's center of commerce, industry, transportation, and culture, but it did not become the capital of Tennessee until 1827 and did not gain permanent capital status until 1843.

Davidson County is the oldest county in the 41-county region of Middle Tennessee. It dates to 1783, when the North Carolina legislature created the county and named it in honor of William Lee Davidson, a North Carolina general who was killed opposing General Cornwallis and the British Army's crossing of the Catawba River on February 1, 1781. The county seat, Nashville, is the oldest permanent European (white) settlement in Middle Tennessee, founded by James Robertson and John Donelson during the winter of 1779-80. The first white settlers established the Cumberland Compact in order to establish a basic rule of law and to protect their land titles. Through much of the early 1780s, the settlers also faced a hostile response from Native American tribes who resented their encroaching on their territory and competing for resources. As the county's many known archaeological sites attest, Native American cultures had occupied areas of Davidson County for thousands of years. The first whites to enter the area were fur traders. Long hunters came next, having learned about the large salt lick, known as French Lick, where they hunted game and traded with Native Americans.

In 1765, Timothy Demonbreun, a hunter, trapper, and former Governor of Illinois under the French, and his wife lived in a small cave (now known as Demonbreun's Cave) on the south side of the Cumberland River near present-day downtown Nashville. The first white child to be born in Middle Tennessee was born there.

During the June 8, 1861, referendum, the closely divided population of Davidson County voted narrowly in favor of secession: 5,635 in favor, 5,572 against. Middle Tennessee was occupied by Union troops from 1862, which caused widespread social disruption in the state.

The Cumberland River flows from east to west through the middle of the county. Two dams within the county are Old Hickory Lock and Dam and J. Percy Priest Dam, operated by the United States Army Corps of Engineers. Important tributaries of the Cumberland in Davidson County include Whites Creek, Manskers Creek, Stones River, Mill Creek, and the Harpeth River. 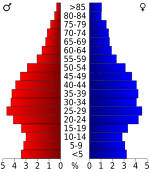 For U.S. Census purposes, the portions of Davidson County that lie outside the boundaries of the six independently incorporated municipalities are collectively treated as the Nashville-Davidson balance.

In addition, several other communities in the county that lack the official status of incorporated municipalities (either because they were never incorporated or because they relinquished their municipal charters when consolidation occurred) maintain their independent identities to varying degrees. These include:

All content from Kiddle encyclopedia articles (including the article images and facts) can be freely used under Attribution-ShareAlike license, unless stated otherwise. Cite this article:
Davidson County, Tennessee Facts for Kids. Kiddle Encyclopedia.