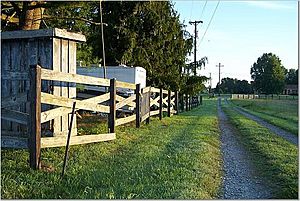 A farm in Joelton

Joelton is a neighborhood of Nashville, Tennessee. Joelton is primarily in the northwestern portion of Davidson County along Interstate 24 (Exit 35) and junctions with U.S. Route 431, but parts of Joelton bordering Exit 31 of Interstate 24 lie in Cheatham County. Governmentally, most of Joelton is in Metropolitan Nashville - Davidson County, but it retains a separate identity as a community. Joelton is a semi-rural community of farms and suburban neighborhoods 25 minutes north of Nashville. The total 2014 population is 8,189. The population has increased by 14 percent since 2000. According to the NashvilleNext report compiled by Metro Nashville government: "Joelton was settled principally by German, Scots-Irish, and Italian immigrants. Agriculture though small family farms on fertile lands and subsistence farming in the hills forged the economic backbone of the community until the 1920s. Joelton contains several historic rural properties. Small farms line Whites Creek Pike in the northern section of the area. Many feature bungalows as farm houses—an indication of the widespread rural popularity of this house type better known for its suburban examples. Joelton was served by a separate utility district until 1974. Councilman Gary Bates was instrumental in bringing Metro services into Joelton. A fire hall in 1978, paved road and street lights, and other amenities. However, the community struggled when its high school closed in 1980."

The music video for country music artist Miranda Lambert's "Only Prettier" was filmed in Joelton in June 2010, at the Middle School.

All content from Kiddle encyclopedia articles (including the article images and facts) can be freely used under Attribution-ShareAlike license, unless stated otherwise. Cite this article:
Joelton, Tennessee Facts for Kids. Kiddle Encyclopedia.