Bellevue is a neighborhood of Nashville roughly 13 miles southwest of the downtown area via Interstate 40. It is served by the Metropolitan Government of Nashville and Davidson County.

In the 1950s, Bellevue was a small community which existed primarily to serve the needs of nearby farms. It was mostly along the railroad tracks near the Harpeth River, and had only a few buildings such as a hardware store, post office, and a Masonic lodge hall. The suburbanization was made official when the United States Postal Service changed the office's designation from "Bellview, Tennessee" to a branch of the Nashville office in the late 1970s.

Bellevue is a popular destination for nature lovers because of several attractions such as the massive Warner Parks that feature miles of paved and unpaved trails for hikers and cyclists, as well as the beginning access point for the multi-state recreational highway known as the Natchez Trace Parkway.

Bellevue is the home to the redeveloping property One Bellevue Place on the property formerly known as Bellevue Center Mall. Purchased by Bellevue Development, LLC on December 10, 2007, mortgage financing was more recently secured to redevelop the site into a retail lifestyle center. Demolition of the old building was completed in early 2016. Following months of grading, construction began in late summer of 2016. Completion is anticipated in November 2017 and the property will hold a wide-ranging mix of retail, office buildings, a 120-room Hilton Home2Suites hotel, and 330 apartments.

One Bellevue Place will also be home to the region’s first Sprouts Farmer's Market grocery store, as well as a Carmike movie theater.The property was formerly owned by Inland Western Real Estate Trust.

On May 2, 2010, the Bellevue area was hard-hit by a devastating flood, but it has rebounded and is experiencing a transformative trajectory in residential and commercial development.

Bellevue's first library service was via bookmobile during World War II. The Bellevue Public Library opened in 1984 in the old woodshop/agriculture classroom building of the original Bellevue High School, built in 1931 and torn down in 1971 when the new Bellevue High School was built on the other side of Colice Jeanne Road. The former gymnasium at the back of the school became the Bellevue Community Center. Both the woodshop/agriculture building and the gymnasium were added in the 1950s. 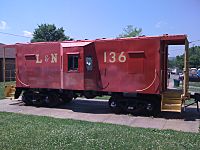 The red caboose of Bellevue Park.

Bellevue Park is located on Colice Jeanne Road in Bellevue across from Bellevue Middle School and next to the Bellevue Branch Library. It is part of the Metro Nashville Parks System. The park is called Red Caboose Park due to the red caboose that sits on site and the sign at the entrance which reads "Red Caboose Park." The park also has a log cabin built on the site. The park features an exercise path for walkers and joggers, as well as a playground built by community volunteers in 1996 as part of the Bellevue Bicentennial Celebration.

Red Caboose Park is the site of the annual Bellevue Community Picnic, which attracts around 20,000 people each year.

All content from Kiddle encyclopedia articles (including the article images and facts) can be freely used under Attribution-ShareAlike license, unless stated otherwise. Cite this article:
Bellevue, Tennessee Facts for Kids. Kiddle Encyclopedia.