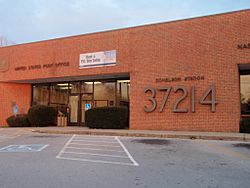 Donelson is a neighborhood of Nashville, Tennessee about 10 km (6 mi) east of downtown Nashville along U.S. Route 70. It is named in honor of John Donelson, co-founder of Nashville and father-in-law of Andrew Jackson, Nashvillian and seventh President of the United States. It is now incorporated as part of the Metropolitan Government of Nashville and Davidson County.

In the 1880s Donelson was a station on the Tennessee & Pacific Railway just south of the former village of McWhirtersville on the Lebanon Pike. It began its modern development shortly after World War II, and its location next to Nashville's airport led to much of its later growth. It was also the site of an early example of what would later be called a shopping center or "strip mall", Donelson Plaza.

Donelson's oldest neighborhood is Bluefields. The development of the Bluefields subdivision began in 1929 by the Bransford Realty Company of Nashville, Tennessee. Home construction began in the early 1930s, with fifty to sixty homes built by the Bransford Realty Company by the end of 1938. The final phase of building, Bluefield Square, was developed in the 1970s on the property once occupied by the Swiss Farm Dairy within Bluefields proper.

Donelson is now an example of an early postwar suburb with a stock of mostly half-century old, red brick, detached ranch-style homes. However, there has been some tendency for infill in recent years, largely tied into the expansion of sewers. The area's desirability was increased somewhat by the impoundment of Percy Priest Lake on the Stones River in the late 1960s which increased summertime recreational opportunities.

Donelson was the home of the Opryland USA theme park, which closed in 1997. This property is now the Opry Mills shopping mall and the Grand Ole Opry. It is usually considered as something of a unit along with the adjacent neighborhood of Hermitage just across the Stones River along U.S. 70; the two communities share a Chamber of Commerce.

In recent years, Donelson has shown high demand as a desirable place to live, and is commonly discussed as one of the next Nashville neighborhoods set for explosive growth. A 2016 article on Realtor.com cited Donelson as the 15th most desirable zip code in the United States.

As with most unincorporated communities which are not census-designated places, making a realistic estimate of the community's population is very problematic. Donelson is generally considered to be coextensive with the United States Postal Service's ZIP code 37214, which is the ZIP code for the Nashville Post Office's Donelson Station.

The community has a station on the Music City Star commuter rail line, which began operation in September 2006.

All content from Kiddle encyclopedia articles (including the article images and facts) can be freely used under Attribution-ShareAlike license, unless stated otherwise. Cite this article:
Donelson, Tennessee Facts for Kids. Kiddle Encyclopedia.