Kids Encyclopedia Facts
This page is about the reservoir in Middle Tennessee. For the U.S. Congressman whom it was named for, see Percy Priest. 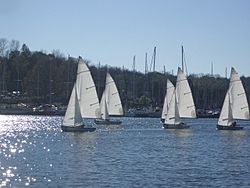 J. Percy Priest Lake is a reservoir in north central part of Tennessee. It is formed by J. Percy Priest Dam, located between miles six and seven of the Stones River. The dam (easily visible from Interstate 40) is located about 10 miles (16 km) east of downtown Nashville and impounds a lake 42 mi (68 km) long. The lake and dam are named for Congressman Percy Priest.

The lake covers portions of Davidson, Rutherford and Wilson counties and consists of 14,200 acres (5,700 ha) of water at summer pool elevation 490 feet (150 m) above mean sea level. The water is surrounded by 18,854 acres (7,630 ha) of public lands; 10,000 acres (4,000 ha) are devoted to wildlife management. The site of the former town of Old Jefferson was inundated by the reservoir; the community was demolished in the early 1960s for the building of the dam.

The Percy Priest dam project was first authorized by the U.S. Congress in 1946 under the name "Stewarts Ferry Reservoir." An act of Congress approved July 2, 1958, changed the name to honor Congressman Priest. The U.S. Army Corps of Engineers project was completed in 1967.

The lake is mentioned in the song 'Cover Me Up' by musician Jason Isbell. 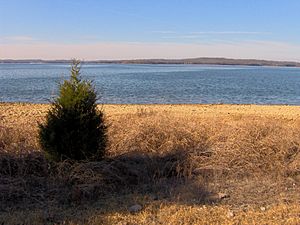 J. Percy Priest Lake impoundment of Stones River near Nashville just off the Volunteer Trail, near the Bakers Grove section

All content from Kiddle encyclopedia articles (including the article images and facts) can be freely used under Attribution-ShareAlike license, unless stated otherwise. Cite this article:
Percy Priest Lake Facts for Kids. Kiddle Encyclopedia.