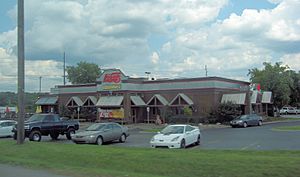 Goodlettsville was named for A. G. Goodlett, pastor of the Cumberland Presbyterian Church from 1848 to 1853.

In 2016, a second little league team from Goodlettsville qualified for the World Series, giving the State of Tennessee four LLWS tournament teams in five years; and, the eighth in state history. The 2016 team advanced to the United States championship game where they lost to a team from New York; thus, falling one game short of the World Series championship game. The team finished fourth in the world after next losing the consolation game against a team from Panama, the international runner-up.

On the Sumner County side of the line, the only school within the city limits is Madison Creek Elementary School, which feeds to Hunter Middle School and Beech Senior High School in Hendersonville. A portion of the city is zoned for Millersville Elementary, which feeds White House Middle and High Schools.

Goodlettsville residents on the Sumner County side have the option of sending students to Sumner County's Merrol Hyde Magnet School, if the students meet its criteria. Furthermore, residents on the Davidson County side have the opportunity to send students to Head Magnet Middle School, which feeds to Martin Luther King Jr. Academic Magnet, or Meigs Magnet Middle which feeds to Hume Fogg Academic High School. Both Meigs and Head have academic requirements.

All content from Kiddle encyclopedia articles (including the article images and facts) can be freely used under Attribution-ShareAlike license, unless stated otherwise. Cite this article:
Goodlettsville, Tennessee Facts for Kids. Kiddle Encyclopedia.