Madison (originally Madison Station) is a former settlement, now a suburban neighborhood of northeast Nashville, in the U.S. state of Tennessee. It is incorporated as part of the Metropolitan Government of Nashville and Davidson County.

Madison is only 8.2 miles north at its closest point to downtown Nashville. Ellington Parkway serves as a direct connection from downtown Madison to downtown Nashville with exits to Inglewood and East Nashville. Madison is located close to major highways and parkways: 65, 40, 24, Briley and local access roads St. Route 45 (Old Hickory) and Dickerson Road. It begins at Briley Parkway and extends to the Hendersonville line in Rivergate, from Dickerson Road to the Cumberland River.

Madison is one of 14 Community Plan areas in the Metro Nashville-Davidson County area for which zoning and land use planning is done. The 2015-updated Community Plan for Madison, an 89-page document adopted by the Metropolitan Planning Commission, was updated in 2015 as part of NashvilleNext's long-term planning.

Madison is one of about 26 suburban neighborhoods of Nashville.

Madison Station post office was opened in 1857, at which time Madison Station was about eight miles from Nashville proper, roughly half-way between Nashville and Goodlettsville. In the 20th century, Madison acted as a connecting suburb until being annexed into Nashville in 1963 due to the consolidation with Davidson County. Madison funnels traffic to Goodlettsville, Hendersonville, Gallatin, Inglewood, and downtown Nashville.

Old Hickory Boulevard (State Route 45) is a section of the Trail of Tears, the route of the forced removal of Cherokee Indians from North Carolina to Oklahoma, directed by U.S. President Andrew Jackson. This route passes directly by Jackson's estate, The Hermitage, in the neighboring community of Old Hickory, Tennessee.

Madison was once home to the "Hillbilly Day" festival. This festival was created as a fundraiser to benefit schools within the area. This fundraising festival included costumes, school events, and a parade. Madison's first "Hillbilly Day" was in 1952.

Madison is also home to Amqui train station that was built by the Louisville and Nashville Railroad and serviced by the company until 1979. After L & N Railroad vacated the station, country music legend Johnny Cash purchased it and moved it from Madison to his home in nearby Sumner County. The station was later returned to Madison after the passing of Cash and his wife June Carter Cash. Today it houses a museum and visitor center for the town.

Another source of recreation for the Madison community is Rivergate Mall which is located at the corner of Conference Drive and Gallatin Pike North. This mall house over 130 different stores including mainstream department stores like Dillards, Macy's, and JCPenney.

The Madison Branch Library opened in 1977, and is part of the Nashville Public Library. A new facility, themed after the book The Lion, the Witch and the Wardrobe, opened in 2000. Meeting rooms, group study rooms, and public computers are available.

Madison is a unique town in Nashville because of its easy accessibility via several major roads and interstates.

Major roads running through Madison are Old Hickory Boulevard aka State Rt. 45 and Gallatin Pike (U.S. Route 31E). Dickerson Road runs along the west border of Madison. Briley Parkway (State Route 155) with easy access to Interstates 24 and 40 runs along the south border of Madison. Interstate 65 has two main exits into Madison, one at Old Hickory Blvd, the other at Rivergate shopping area. Ellington Parkway connects Downtown Nashville to Downtown Madison with exits along the way to key areas of East Nashville and Inglewood. Vietnam Vets Parkway is accessible off Conference Drive directly off Gallatin which links Madison & Goodletsville to Hendersonville and Gallatin.

Madison is on the rapid transit Metro bus lines. Madison boasts extensive walkability with several miles of sidewalks. There are also bike lanes in some of the newer asphalt in Madison and there are plans to build a pedestrian and bike extension from Peeler Park to Stones River Park which will connect Peeler key greenways leading to downtown Nashville. 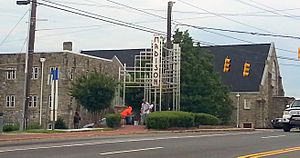 However, because Madison, TN features two major centers: Downtown Madison and Rivergate the demographic study includes several surrounding communities in addition to the population information for Madison only. Due to its vast resources, Madison directly services communities in the area including East Nashville, Downtown Nashville, Inglewood, White's Creek, Old Hickory with the ability to attract patrons from all over Davidson County including Sumner and Wilson counties.

All content from Kiddle encyclopedia articles (including the article images and facts) can be freely used under Attribution-ShareAlike license, unless stated otherwise. Cite this article:
Madison, Tennessee Facts for Kids. Kiddle Encyclopedia.