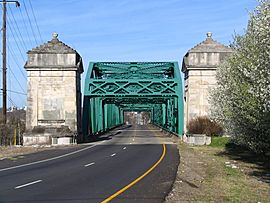 North Entrance to Old Hickory, Tennessee, on the Old Hickory bridge over the Cumberland River

Old Hickory is a neighborhood of metropolitan Nashville named in honor of President Andrew Jackson who was nicknamed "Old Hickory."

This area is located in the Hadley Bend section of eastern Davidson County. The area is probably best known for being a former company town as the site of a large DuPont plant. Many of the houses in Old Hickory were built to house DuPont employees and supervisors in the early days of the factory's existence.

Old Hickory is bordered by the Cumberland River on the north and west, Old Hickory Lake to the east, and the former city of Lakewood to the south. To the north of the area is also the location of Old Hickory Lock and Dam. The main street through the area is Old Hickory Boulevard (Tennessee State Route 45).

The area today is the site of a country club, large golf course, city park, a Chamber of Commerce, and the DuPont plant, which has been mostly shut down but continues to employ a few hundred workers. The Nashville National Weather Service Forecast Office is located just to the southeast in nearby Wilson County, but it has an Old Hickory mailing address.

Many historic homes are located in the area known as the Village of Old Hickory, containing a number that are listed on the National Register of Historic Places. The smaller bungalow houses were built by DuPont as residences for factory workers, with the larger homes being designated for management. Many of the formerly dilapidated houses in the area are being bought, repaired and modernized.

All content from Kiddle encyclopedia articles (including the article images and facts) can be freely used under Attribution-ShareAlike license, unless stated otherwise. Cite this article:
Old Hickory, Tennessee Facts for Kids. Kiddle Encyclopedia.