Bicentennial Capitol Mall State Park, also known as the Bicentennial Mall, is an urban state park in downtown Nashville, Tennessee. The park is located northwest of the Tennessee State Capitol building and was opened on June 1, 1996, to commemorate the 200th anniversary of the establishment of Tennessee’s statehood. 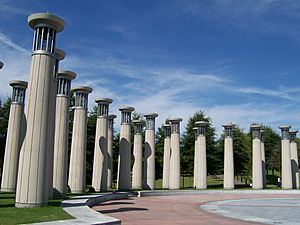 Carillon pillars in the park

The Bicentennial Mall features a number of design elements which provide visitors with information on Tennessee history and its natural attractions and landmarks. On the southern end of the park is the Tennessee Map Plaza, a 200-foot (60 m) wide granite map of the state highlighting its counties, rivers, major roads, and other attributes. Eight smaller granite maps arranged below it show other information about the state. The Rivers of Tennessee Fountains feature 31 water fountains representing the major rivers and waterways of the state. The central feature of the park is the Tennessee Amphitheater, a 2000-seat terraced amphitheater used for special events. The northern end of the park features the Court of 3 Stars, a circular plaza made of red, white, and blue granite representing the three Grand Divisions of Tennessee. Surrounding the plaza are 50 columns containing a 95-bell carillon, representing the 95 counties of the state and its musical legacy.

A tree-lined linear lawn stretches between the Amphitheater and the Court of 3 Stars, and features four main walking paths and several memorials. The two inner walkways make up the Path of Volunteers; each is 1,400 feet (430 m) long and were built with 17,000 inscribed pavers. The eastern outer path is the Walkway of Counties, designed to represent the topography of the Grand Divisions and featuring flora from across the state. Throughout the walkway are time capsules from each county, which will not be opened until the state's 300th birthday on July 1, 2096. The western outer path is the Pathway of History, containing a 1,400-foot (430 m) wall inscribed with the state's history. Also to the west of the lawn are the Civilian Conservation Corps Memorial, the World War II Memorial, the Centennial Memorial, and the Statehood Memorial.

In 2006, the Nashville Business Journal ranked the Bicentennial Mall as the number one tourist attraction in Nashville. In 2011, the American Planning Association listed the park as one of the top ten public spaces in the United States.

All content from Kiddle encyclopedia articles (including the article images and facts) can be freely used under Attribution-ShareAlike license, unless stated otherwise. Cite this article:
Bicentennial Capitol Mall State Park Facts for Kids. Kiddle Encyclopedia.