Dickson County is a county located in the U.S. state of Tennessee. As of the 2010 census, the population was 49,666. Its county seat is Charlotte.

Dickson County is home to Tennessee's oldest courthouse in continuous use, built in 1835. This is the second courthouse in Charlotte as the first one, a log building, was destroyed in the Tornado of 1833, which destroyed all but one building on the courthouse square.

October 25, 1803 the Tennessee General Assembly passed a bill creating Dickson County, the 25th of Tennessee's 95 counties. It was formed from parts of Montgomery and Robertson counties, and was named for William Dickson, a Nashville physician then serving in the United States Congress. Dickson never lived in the county, but his relatives were prominent in its early development. Dickson was a close friend of President Andrew Jackson.

General James Robertson built the first iron works in west Tennessee in Dickson County. Robertson sold his furnace in 1804 to Montgomery Bell (1769–1855), who became one of the state's wealthiest capitalists and industrialists.

Prior to the 1920s, numerous private high schools and colleges existed in Dickson County. These included the Tracy Academy, Charlotte Female School, Alexander Campbell School, Edgewood Academy and Normal College, the Dickson Academy, Dickson Normal School (where Hattie Carraway, the first woman elected to the U.S. Senate, was educated), Glenwylde Academy, and Ruskin Cave College. Most of these closed before or during the Great Depression. As is typical of most Tennessee counties, all public schools of the county are currently operated by a single county-wide school district.

The Ruskin Colony and The Coming Nation 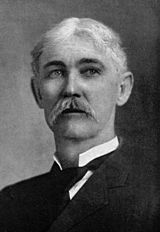 Julius Wayland, publisher of The Coming Nation and the Appeal to Reason.

The Ruskin Colony (or Ruskin Commonwealth Association) was a 250-member, utopian socialist cooperative established in Dickson County in 1894. Initially located near Tennessee City, it relocated to what is now Ruskin. Internal conflict had brought about the dissolution of the colony by 1899.

The Coming Nation, a socialist communalist paper established by Julius Augustus Wayland in Greensburg, Indiana, was relocated to the Ruskin Colony. It was the forerunner of the Appeal to Reason, which later became a weekly political newspaper published in the American Midwest from 1895 until 1922. The Appeal to Reason was known for its politics, giving support to the Farmers' Alliance and People's Party, before becoming a mainstay of the Socialist Party of America following its establishment in 1901. Using a network of highly motivated volunteers known as the "Appeal Army" to increase its subscription sales, the Appeal's paid circulation climbed to over a quarter million by 1906, and half a million by 1910, making it the largest-circulation socialist newspaper in American history.

In July 1917, a mass meeting was held in the Alamo Theatre in Dickson to raise $760 (equivalent to $25,000 in 2016) to pay for the surveying of the Bristol to Memphis Highway through Dickson County. The money was raised in less than 15 minutes by donations from those present at the meeting. State highway surveyors began surveying the route on August 14, 1917. The building of this highway put the county along the route from New York to San Francisco known as the “Broadway of America,” now Highway 70.

On November 4, 1952, Frank G. Clement (1920–1969) of Dickson was elected Governor of Tennessee. He served as governor from 1953 to 1959, and again from 1963 to 1967. Known for his energetic speaking ability, he delivered the keynote address at the 1956 Democratic National Convention. The Hotel Halbrook, where Clement was born, still stands in Dickson, and has been listed on the National Register of Historic Places.

Dickson County is bordered on the northeast by the Cumberland River. The Harpeth River passes along the county's eastern border. 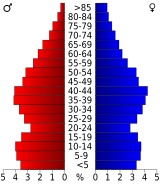 All content from Kiddle encyclopedia articles (including the article images and facts) can be freely used under Attribution-ShareAlike license, unless stated otherwise. Cite this article:
Dickson County, Tennessee Facts for Kids. Kiddle Encyclopedia.