Montgomery County is a county located in the U.S. state of Tennessee. As of the 2010 census, the population was 172,331. The county seat is Clarksville. The county was created in 1836.

The county was named for John Montgomery, a soldier in the American Revolutionary War and an early settler who founded the city of Clarksville. It was organized in 1796 when Tennessee County, North Carolina, was split, and Tennessee became a state. (The federal government had reached an agreement with certain of the original colonies, such as North Carolina, to give up their western claims across the Appalachians.) The same year, much of the eastern portion of the county was combined with land taken from Sumner County to form [[Robertson County, Tennessee. Later acts of the Tennessee General Assembly further reduced the county by 1871 to its current size and boundaries.

Montgomery County was the site of several early saltpeter mines. Saltpeter is the main ingredient of gunpowder and was obtained by leaching the earth from several local caves. Bellamy Cave, located near Stringtown, still contains the remains of two dozen saltpeter leaching vats. It appeared to have a large operation. Cooper Creek Cave also shows evidence of extensive mining and contains the remains of "many saltpeter hoppers". Both were probably mined during the War of 1812. Dunbar Cave is reported to have been mined for saltpeter during the Mexican War of 1848, but commercial development has destroyed any evidence of this. Little mining is likely to have happened here during the Civil War, since the Union Army captured and occupied this part of Tennessee in early 1862.

Montgomery County lies in a region of well-developed karst topography. A large cave system is named Dunbar Cave. Dunbar Cave is the centerpiece of Dunbar Cave State Park, which encompasses approximately 110 acres and is one of the most visited units in the Tennessee State Park System.

Dunbar Cave was extensively used by prehistoric Indians, who inhabited this area for thousands of years before European encounter. Remains of their cane torches have been found in the cave, and archaeologists have excavated numerous artifacts inside the entrance. During a research trip into the cave on January 15, 2005, Park Ranger Amy Wallace, History professor Joe Douglas, local historian Billyfrank Morrison, and Geologist Larry E. Matthews, discovered Indian glyphs on the walls of the cave. Subsequent investigations by archaeologists from the University of Tennessee at Knoxville confirmed that these drawings were left by people of the Mississippian culture, which was active about 1000-1300 CE. These Indian glyphs were featured for a few years on the tour of the cave.

In 2009 Tennessee closed Dunbar Cave to the public because White Nose Syndrome was diagnosed in a bat and they did not want the disease to spread. The above ground portion of the Park is still open to the public. 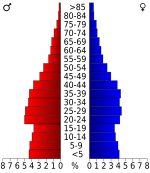 All content from Kiddle encyclopedia articles (including the article images and facts) can be freely used under Attribution-ShareAlike license, unless stated otherwise. Cite this article:
Montgomery County, Tennessee Facts for Kids. Kiddle Encyclopedia.