Fort Campbell is a United States Army installation located astride the Kentucky-Tennessee border between Hopkinsville, Kentucky, and Clarksville, Tennessee. Fort Campbell is home to the 101st Airborne Division and the 160th Special Operations Aviation Regiment.

The fort is named in honor of Union Army Brigadier General William Bowen Campbell, the last Whig Governor of Tennessee. 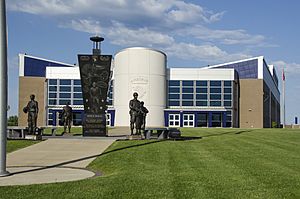 The site for Fort Campbell was selected on July 16, 1941, and the Title I Survey was completed November 15, 1941, coincidentally the same time the Japanese Imperial Fleet was leaving Japanese home waters for the attack on Pearl Harbor. Construction of Camp Campbell began on January 12, 1942. Within a year, the reservation designated as Camp Campbell was developed to accommodate one armored division and various support troops, with a total size of 102,414 acres (414 km2), and billets for 2,422 officers and 45,198 enlisted personnel.

Due to its close proximity to Clarksville, Tennessee, the War Department on March 6, 1942, designated Tennessee as the official address of the new camp. This caused a great deal of confusion, since the Headquarters was in Tennessee and the post office was in Kentucky. After many months of mail delivery problems, Colonel Guy W. Chipman requested that the address be changed to Camp Campbell, Kentucky. The War Department officially changed the address on September 23, 1942.

Early in the summer of 1942, the post's initial cadre, one officer and 19 enlisted men, arrived from Fort Knox, Kentucky. From that time until the end of World War II, Camp Campbell was the training ground for the 12th, 14th and 20th Armored divisions, Headquarters IV Armored Corps and the 26th Infantry Division.

In the spring of 1949, the 11th Airborne Division arrived at Campbell following occupation duty in Japan. The 11th was in residence there until early 1956.

By April 1950, the post had evolved from a wartime training camp to a permanent installation and was renamed Fort Campbell.

From 1950 to 1962 the post operated an Airborne Course which trained nearly 30,000 soldiers as paratroopers before its inactivation.

On September 21, 1956, Secretary of the Army Wilber M. Brucker and the Army Chief of Staff, General Maxwell D. Taylor, presented the colors of the 101st Airborne Division to MG T.L. Sherbourne, the first commander of the new ROTAD airborne division. This was the official ceremony reactivating the famed "Screaming Eagles" of World War II.

The 1st Brigade was sent for duty in Vietnam in July 1965. Soon thereafter, upon the escalation of hostilities in Southeast Asia, the rest of the division arrived. Also in response to the military buildup, the 6th Infantry Division was reactivated at Fort Campbell on November 24, 1966, and inactivated July 25, 1968.

In September 1971 the 173rd Airborne Brigade returned to Fort Campbell and conducted its official homecoming ceremonies, which were presided over by Secretary of Defense Melvin Laird. The 173rd was then inactivated on 14 January 1972 and its personnel and the equipment used to rebuild the 3rd Brigade, 101st Airborne Division (Airmobile). The 3rd Brigade remained on jump status until April 1974, when its jump status was terminated and the division became entirely airmobile. On April 6, 1972, the 101st Airborne Division (Airmobile) was officially welcomed back to its home station after the cessation of hostilities in Vietnam. The ceremonies were attended by Vice President Spiro T. Agnew and General William C. Westmoreland, Army Chief of Staff.

On 12 December 1985, 246 servicemembers died with eight aircrew shortly after takeoff from Gander, Newfoundland, Canada, during a return from peacekeeping duties in Egypt. A memorial grove of trees and monument are near the post museum.

Early on April 26, 2011, a strong tornado struck the Campbell Army Airfield at Fort Campbell, destroying one building and causing heavy damage to several others, all of which were large and well-constructed. Large doors were blown in on these buildings as well. Several other smaller buildings received minor to major damage, and numerous heavy vehicles were damaged, with at least three being flipped over. Immediately north of the airfield, across farmland, several dozen trees were downed, two barns were heavily damaged, three power poles were blown down, and some shingles were blown off of a house. The tornado was rated as an EF3 on the Enhanced Fujita scale.

Kentucky has limited rights to taxation: Individuals performing services on the Kentucky portion of Fort Campbell only pay taxes to the state where they are residents, refer to US Code Title 4, Chapter 4, §115.

The Fort Campbell parachute demonstration team was established in 1958 during the infancy of precision freefall as the Army's first such team — pre-dating the Golden Knights, United States Army Parachute Team, by one year. Early team members were soldiers who volunteered their free time in order to perform quality parachute demonstrations. In 1984, the 101st command group opted to form a full-time parachute team, known as the "Screaming Eagles".

The "Screaming Eagles" perform more than 60 parachute demonstrations each year in front of an average viewing audience of 5,000 spectators. The team has a diverse background of Army Military Occupational Specialties (MOS) and at this time has seven members. The team has one Light Wheeled Mechanic, two Combat Medics, three Infantrymen, and one Parachute Rigger most of whom have combat experience. Collectively, the 2009 team has more than 40 years of skydiving experience and more than 6,000 skydives.

All content from Kiddle encyclopedia articles (including the article images and facts) can be freely used under Attribution-ShareAlike license, unless stated otherwise. Cite this article:
Fort Campbell Facts for Kids. Kiddle Encyclopedia.