Hickman County is a county located in the U.S. state of Tennessee. As of the 2010 census, the population was 24,690. Its county seat is Centerville.

Hickman County was named for Edwin Hickman, an explorer and surveyor who was killed in an Indian attack at Defeated Creek in 1791. The county was established in 1807, and named for Hickman at the suggestion of Robert Weakley, a legislator who had been a member of Hickman's surveying party.

Hickman and the Duck River valley was originally claimed by the Chickasaw people of western Tennessee and northern Mississippi. Among its first white settlers was John Gordon, the famous "Captain of the Spies" who later fought at Horseshoe Bend and at Pensacola under Andrew Jackson. Gordon acquired land in Chickasaw territory in what is now Hickman County on the banks of the Duck River, where, in a partnership with Chief William "Chooshemataha" Colbert, he operated a ferry and Indian trading post for settlers traveling on the Natchez Trace. The trace was a war-path later made into a federal road for settlers moving from Tennessee to the lower Mississippi territory. The Chickasaw ceded the land to Tennessee in 1805 and Gordon kept the estate, moving his family there in 1812 and eventually amassing a plantation of over 1500 acres. The Gordon house still stands by the Duck River today, now maintained by the Natchez Trace National Parkway.

Throughout the 19th century, the county's industry revolved around iron furnaces, which made use of the county's natural supply of high-quality iron ore. Early furnaces included Napier's furnace near Aetna, which was destroyed by Union soldiers during the Civil War, and furnaces built by the Standard Coal Company in the 1880s.

Hickman natives include songwriter Beth Slater Whitson and Grand Ole Opry personality Minnie Pearl. William F. Lyell was a corporal in the United States Army during the Korean War. He was posthumously awarded the Medal of Honor for his actions on August 31, 1951.

The county is the subject of the Johnny Cash song "Saturday Night In Hickman County," and the Hickman community of Grinder's Switch is indirectly mentioned in the song, "The South's Gonna Do It Again," by the Charlie Daniels Band (one line refers to the band Grinderswitch, and their song "Right On Time"). 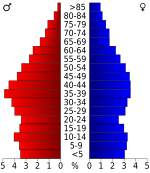 All content from Kiddle encyclopedia articles (including the article images and facts) can be freely used under Attribution-ShareAlike license, unless stated otherwise. Cite this article:
Hickman County, Tennessee Facts for Kids. Kiddle Encyclopedia.