The community was named for the "good water" of a nearby mineral spring. Remnants of the former mineral springs resort is preserved as the Bon Aqua Springs Historic District, listed on the National Register of Historic Places.

Phillip Van Horn Weems was major of the 11th Tennessee, he owned Bon Aqua Springs before the war, Weems was killed in the Battle of Atlanta and in the 1880s was exhumed from the CS cemetery in Griffin, GA and brought back in a vinegar barrel by wagon and buried in the family cemetery located at the end of Weem's Cemetery road near Bon Aqua Springs. You can see the back of the Weems' house from the cemetery. Recorded on the Tennessee Civil War Message Board.

Country Music legend Johnny Cash used to own Weems' old farm house for over 3 decades, and The Storytellers Museum which converted from a general store and recording studio that Johnny Cash used as a place for local concerts now become new landmark of Bon Aqua. 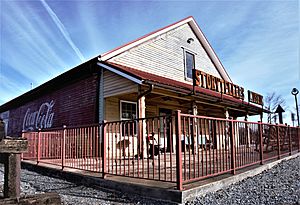 All content from Kiddle encyclopedia articles (including the article images and facts) can be freely used under Attribution-ShareAlike license, unless stated otherwise. Cite this article:
Bon Aqua, Tennessee Facts for Kids. Kiddle Encyclopedia.